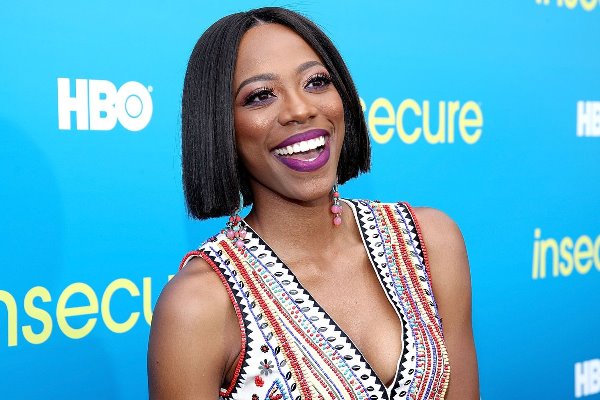 Nigerian-born American star actress Yvonne Yvonne Orji, who acted a sex-drunk character Molly in HBO series Insecure, is proud to be a 33-year-old virgin, even though she is currently playing the sexy role.

The Port Harcourt-born star said she is keeping herself for her husband.

“I wasn’t going to hide it just because I’m on TV,” the Nigerian star told People. “I’m grounded in who I am.”

And to show just how much she is dedicated to keeping her virginity, she created a clothing line to promote abstinence. “I have a clothing company called Rock Your Stance, and we sell shirts that say ‘Keeping it locked till I get that rock’,” she said, adding, “Entertainment chose me. Before any of this happened, I sat down with myself and with God. I said, ‘I know why I’m here. It’s to make you proud.’”

Yvonne Orji went further to speak about her career as an actress, adding that her parents, like most Nigerian parents, wanted her to be a doctor.

“It sounded noble,” she said. “But then I took organic chemistry and I was like, ‘Well, maybe not.’ I ended up getting my master’s degree in public health and then working in war-torn Liberia to stall from crushing my parents’ hopes and dreams.”

She did it, and is promoting abstinence until marriage.

Her belief has invoked social media comments with spurious comments on twitters.

Morqos‏ said: “ Why do people think Yvonne Orji is lying about her virginity? That’s such a stupid thing to lie about.”

Morgan‏ said “Yvonn Orji has said she’s a virgin like 100 times and y’all are just now finding out today and making a big deal about it.”

“Yvonne Orji is goals mate. Not because she’s a virgin but because she’s unashamed to speak about it & link it to her faith in this day & age,” says king woman, in her tweet.

Orji emigrated to the U.S. from Nigeria at age 6. “It was the traditional immigrant story of my parents wanting the best for us and bringing us here,” she says. But life in Maryland wasn’t always easy.

“I was bullied because I have this thick Nigerian accent,” she recalls. “My mom would say, ‘We didn’t come to America for you to be popular.’ Which is fair, but as a kid, you’re just like, it would be really nice to have this thing that everyone else has.”

Later, after graduating with a master’s degree in public health from George Washington University, Orji says she shocked her family (who had always hoped she’d be a doctor), by announcing she wanted to move to New York to pursue stand-up comedy.

10 reasons we so love Adesua Etomi!