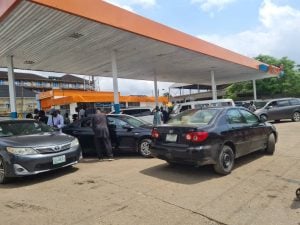 Scarcity of petrol is gradually being experienced again as there are Long queues in filling stations across Lagos State on Monday.

Two weeks ago, long queues were spotted in the Federal Capital Territory, Abuja, and neighbouring Nasarawa and Niger States, among

It was reported by Topnaija.ng that the President, Major General Muhammadu Buhari (retd.), had approved an increase in the freight rate being paid to transporters of petroleum products in a bid to clear the persistent fuel queues by motorists in parts of the country.

Oil marketers had repeatedly complained that the lingering fuel queues in Abuja and neighbouring Nasarawa and Niger States, among others, were due to the inability of petroleum product transporters to purchase the diesel required to run their trucks.

This, they said, was due to the hike in the pump price of diesel, which was currently dispensed at about N850 per litre.

However, as commuters await the effect of the increase in the freight rate, fuel queues have now been spotted at several filling stations in Lagos.

Our correspondent who observed the development captured the following pictures at some petrol stations across the state.

Kenneth Gbagi clamors that Nigerian President should be a southerner