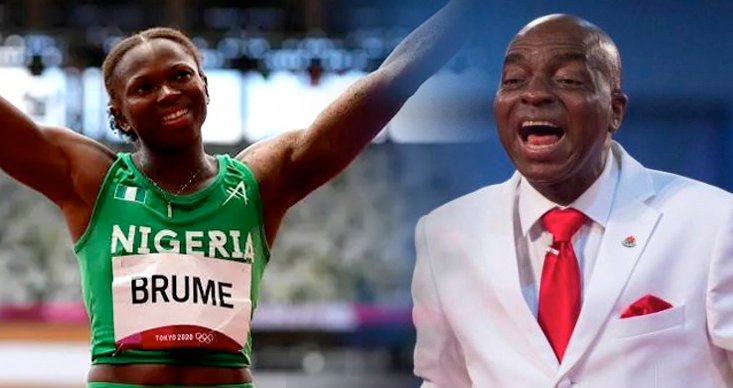 Brume leapt 6.97 metres to claim bronze at the ongoing Tokyo 2020 Olympics in Japan.

According to her, she planned to go to Canaan-Land to wear the Bronze medal on Bishop Oyedepo, saying she was very excited and grateful to God to have won the medal.

“I’m super happy that I was able to make the top three. I’ll say I’m not the best athlete but I’m grateful to God for bringing me this far. I can’t contain my joy no matter the colour of the medal,” Brume stated.

The athlete dedicated her medal to God, who has been her backbone and brought her to the top.

Brume also dedicated her medal to Oyedepo, her family, as well as her coach and others.

She said it had been a great season for her right from April when she was injured, but that she never settled for less no matter the challenges.

Brume stated that she kept on pushing and that her coach kept telling her that she could do it, stressing that it was not all about the training, but the faith she had in God.

Meanwhile, the Federal Government of Nigeria has announced a reward of 15,000 dollars, 10,000 dollars, 7,500 dollars for gold, silver and bronze medalists at the Tokyo Olympics.

Female wrestler, Blessing Oborududu and Long Jump sensation, Ese Brume who won silver and bronze medals will get $10,000 and $7,500 respectively.