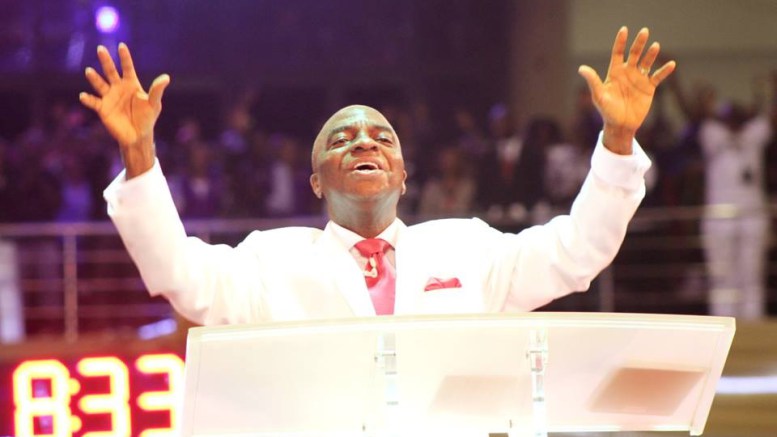 The Founder and presiding Bishop of Living Faith Church Worldwide alias Winners’ Chapel International, David Oyedepo, has maintained that people who do not give a tenth of their income to the church are under a financial curse.

Oyedepo, who is said to be Nigeria’s wealthiest pastor, according to Forbes, said this in a tweet on Thursday. The cleric tweeted, “Tithing is an inescapable covenant obligation. Prosperity not just wealth is impossible without tithing because when you are not paying tithe, you’re under a financial curse.”

In a subsequent tweet on Friday, Oyedepo, said many problems men face could be traced to their financial dealings.

Tithing is an inescapable covenant obligation. Prosperity not just wealth is impossible without tithing, because when you're not paying your tithe, you're under a financial curse. #Tithe #Breakinglimits pic.twitter.com/awqiZ5LDfb

“The way you handle your financial dealings determines greatly what happens to you financially. Many things that afflict men are traceable to their monetary dealings. False financial dealings can open doors to inexplicable afflictions,” he said.

While Oyedepo’s message was well received by many of his followers, some critics on social media described his message as archaic and improper.

He wrote on Instagram, “Utter nonsense! Are you one percent as prosperous or as wealthy as Jeff Bezos, Bill Gates and Warren Buffet who don’t tithe? I personally find this unscriptural statement manipulative and cruel.

“Christ didn’t collect tithe neither did the disciples, yet no one was cursed! Tithing is the old law, obeying the old law partially, without obeying all the 613 laws of Moses is what carries a curse. That’s why to us Christians, it’s referred to as the law of sin and death!”

The critic, while quoting from Hebrews 7:5 said the law of Moses required that the priests, who are descendants of Levi, must collect a tithe from the rest of the people of Israel, who are also descendants of Abraham.

A tweep, @kingmichaelthe2 tweeted, “But Jesus Christ, our Lord, the owner of the church never threatened nor forced anyone to tithe… he who comes to me shall by no means be cast away. How will he now curse those who believe in him because of 10 per cent of their salaries? God is a merciful and loving God. God is love.”

Journalist and writer, Isaac Obasi, who also contributed to the debate, said tithing was based on the Judaic laws and not Christianity.

Tweeting with his handle, @Obasifoundation, he wrote, “Whom did God command to pay tithes and to whom? God told all the nations of Israel to pay tithes from the land he gave… the new covenant is superior and better than the old covenant with better promises. The Bible says if the old covenant was perfect enough there wouldn’t have been need for the New Covenant.

“Again in Matt. 23:23 Jesus rebuked the Scribes and Pharisees and he said woe unto them and called them hypocrites for over-emphasizing the payment of tithes.”

But many of Oyedepo’s followers defended him and asked his critics not to discourage others from paying tithe.

They also warned his critics to remember that he is an anointed man of God and ought to be respected.

@iam_theMK tweeted, “We pay and God is blessing us, if you won’t then seal your lips. You can be cursed for sounding rude at the blessed man of God.”

@iamcedar tweeted, “There are two laws governing kingdom prosperity- spiritual (tithing and giving) and natural (Investing, competences, value). Both complement each other and can’t stand alone if you indeed want kingdom prosperity. I’m not a ‘Winner’ but I agree prosperity is impossible without tithing.”

Oyedepo is the wealthiest preacher in Nigeria with a net worth of over US$150 million. The church owns four private jets and several buildings, including in London and the US. Oyedepo is an author and publisher who has written over 70 titles apart from periodicals. He is the chairman/publisher of Dominion Publishing House (DPH), a publishing arm of the ministry.

DPH has over 4 million prints in circulation to date. Through Oyedepo; Covenant University, Faith Academy, and Kingdom Heritage Model Schools have been established to equip the youth for global impact. The construction of a third university named Crown University is already underway, located in Calabar, Cross River, Nigeria

Related Topics:David Oyedepofeaturetithing
Up Next