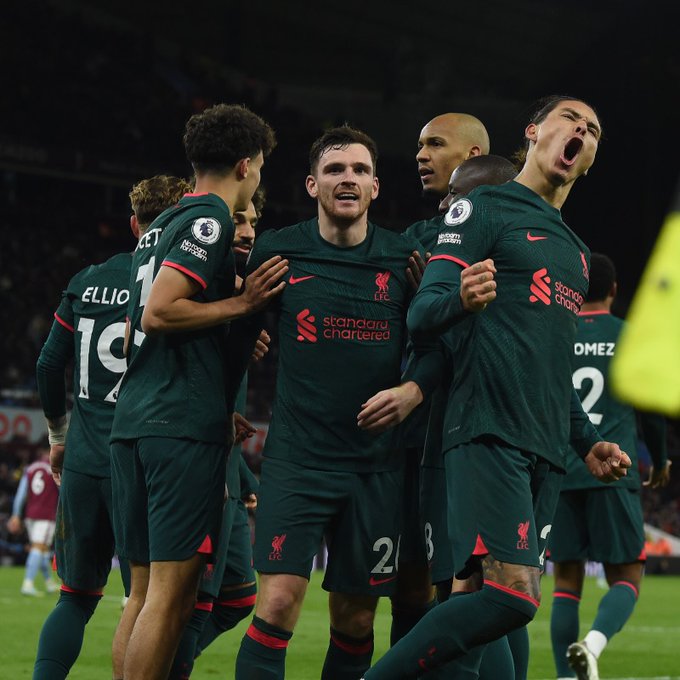 Liverpool vs. Aston Villa game had a lot going for it, specifically with the Darwin Nunez criticism that has lingered on in fans’ eyes following the 3-2 loss to Manchester City at the Etihad, and for a lot of reasons, the premier league fixture did live up to the narratives.

Again, this game had the cameras focused on Liverpool’s big-money signing, Darwin Nunez, with every pass, and every attempt on goal monitored and talked about by pundits and the commentator.

But as all premier league games go, Darwin proved himself both villain and hero on the night to help Liverpool skip past Aston Villa with all 3 points despite Villa putting up a fight early on in the second half to scare the reds with successive attempts on goal.

If points were counted in football matches based on goal attempts, then surely, Liverpool weren’t deserved 3-1 winners on the night against Aston Villa.

It wasn’t due to the Merseyside team playing poorly, which of course could be debated, it was the obvious fact, they left their defense too exposed to allow the likes of Ollie Watkins and Leon Bailly to have repeated chances at goal.

Minus Alisson Becker, the premier league could have been looking at another Liverpool defeat upon return to premier league action, and even with Becker, the Reds very nearly surrendered a 2 goal lead to a pressing monster that was Unai Emery’s Aston Villa team.

Ollie Watkins came in with the crucial goal to gift the Villa fans a glimpse of hope in the second half after Mohamed Salah and Virgil van Dijk had brought them despair prior to half-time with 2 clinical goals in the first half.

The goals of course could have been more, but on the night, Darwin Nunez had more interest in trying to do everything right that he forgot how to do them right.

The Uruguayan very nearly came close to scoring, but nearly was what it was for the former Benfica man.

However, justice and redemption came shortly before the 90th-minute mark when the Uruguayan created what was the sealer of the 3 points on the night by ensuring a ball crossed into the opposition box didn’t go out of play but got to the right target.

The right target could have been anybody in that chaotic moment except it was Spanish youngster and academy graduate, Stefan Bajcetic who was on hand to net the final goal of the game to keep Liverpool’s dreams on with a 3-1 victory.

For Mohamed Salah, he joins Liverpool legend, Sir Kenny Daglish as the 7th all time record Liverpool goal scorer with his 5th-minute goal against Aston Villa, for Left-back, Andrew Robertson, becomes the Premier League defender with the most assists with 54 assists.