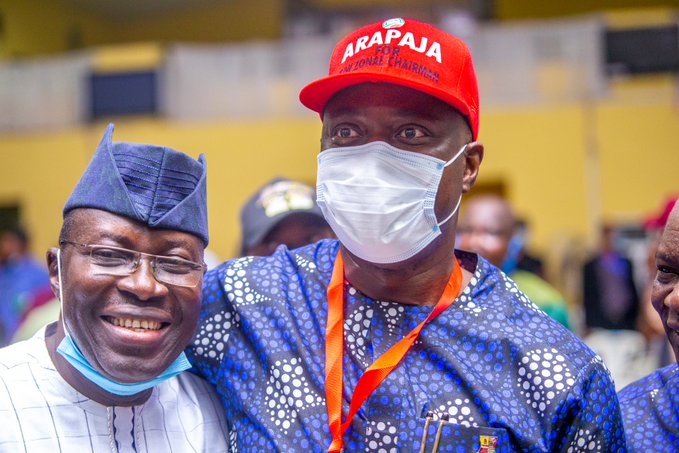 On Monday, it was real politics on display at the Southwest PDP Zonal Congress as Eddy Olafeso backed by Ayo Fayose nearly upstaged Mr. Taofeeq Arapaja, backed by Governor Seyi Makinde as chairman.

But the close election in Osogbo, told a different story as Fayose’s candidate, Eddy Olafeso polled 330 votes, narrowly losing to Arapaja, who had 343 votes. Ten votes were voided.

Olafeso was the former chairman of the zone. Arapaja was a former deputy governor of Oyo and former ambassador.

Benson Abounu, Benue Deputy governor, who represented Gov. Samuel Ortom, as Chairman of the Electoral Panel, announced the result of the election.

Abounu commended the spirit of sportsmanship exhibited by the contestants and the delegates for making the process free, fair and peaceful.

Reacting to his victory, Arapaja said both camps would all work together to move the party forward.

“We thank Gov. Seyi Makinde and Mr Ayo Fayose. PDP is our party. We will work together to move the party forward. We want to reposition the party and I will work with my brother Olafeso to achieve our aims,” Arapaja said..

On his part, Olafeso promised to work with Arapaja to move the party forward.

“The storm is over, there is a new beginning for our party.

“We have to thank God almighty that desPite odds, there is a new beginning for our party.

“The time is now. I thank everybody who supported me,” Olafeso said.

Makinde and Fayose, in their speeches, promised to accept whoever emerges as the South-West PDP Chairman.

In his remarks, Makinde described the congress as a family affair and also an attempt to reposition the PDP in the South-West.

The governor said that whatever the outcome of the election, he would take it as a family affair.

On his part, Fayose said the issue of the congress was circumstantial, adding that “Makinde is our leader.’’