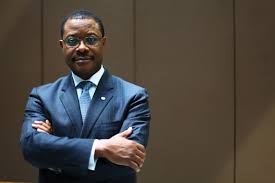 He e was Partner with Africa Capital Alliance, the leading West African private equity fund. He served as the Chief Executive of Ecobank Group at Ecobank Nigeria Plc, (alternate name Ecobank Nigeria Limited) until December 2012. He was a Partner at African Capital Alliance. He joined United Bank for Africa in 2001, where he served as the Chief Executive Officer from 2002 to 2004. He served as Vice President and Head of Africa Trade and Corporate Finance for Sub-Sahara Africa for Citibank since 1990’s.

In the video below, he shares on how Africans can save Africa. Watch!

Related Topics:Businesswealth creation
Up Next

VIDEO: Africa is Poor And 5 Other Myths | Simon Moss |