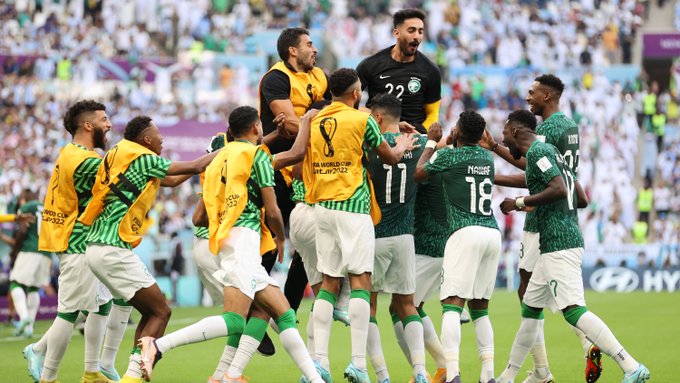 Take a sit back, relax, have a sip of water, refresh your thoughts again, look at the score line one more time, Saudi Arabia actually defeated Argentina in their first group stage game of the World Cup tournament.

Tuesday’s early kick off came as quite the shocker to the world and even to the South American team themselves as they fell flat to a Saudi Arabia side who came into the game with very little to prove but with all the zeal to create problems for Messi’s Argentina.

Going into the game, punters and even pundits could not have predicted the shocker from the 11 a.m. kick off, with Saudi Arabia very much the underdogs if not far less than underdogs if there is any word for it.

Saudi Arabia didn’t have power house names, neither stars that the world is aware of, Argentina had Emiliano Martinez, Lautaro Martinez, Di Maria and Lionel Messi of all people to change the game or turn the tides.

Of course, the twist ended up with the South Americans ending the 90 minutes in shock with Arabia pulling off a miracles comeback to leap frog Argentina 2-1 in the group opener.

Argentina for most parts of the first half had the most possession, had quite the goal threat scored at least 3 goals, which surprisingly were all ruled off for offside with Saudi Arabia perfecting the offside trap more than any European side could have thought of.

The Arab team had a defensive solidity that was very focused, aware and at alert to nullify or render whatever goal threat Argentina might pose.

In fact Argentina’s only goal from the game was a gift handed to Lionel Messi via a penalty call that the 7 time golden ball winner stuck past the Saudi Arabian goalie, Mohammed Khalil Al Owais who by every means should be a contender for man of the match in this fixture for keeping the Arabians in the game at the last minutes of the second half.

The Summary of the game

For Saudi’s front 3, Salem Al Dawsari and Saleh Al-Shehri were instrumental figures in changing the tide in the second half with 2 goals within 4 minutes apiece.