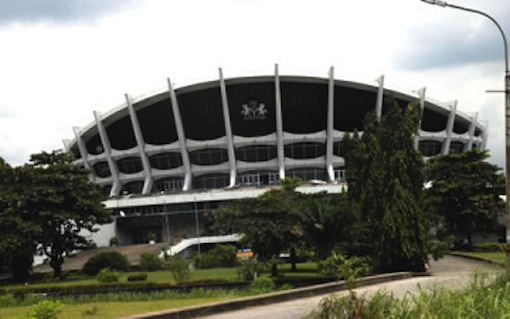 Workers at the National Arts Theatre, Iganmu, Lagos on Tuesday embarked on a peaceful protest against the proposed sale of the national monument and other Federal Government facilities.

The workers carried placards with various inscriptions expressing their opposition to the proposed sale of the national assets.

The National Theatre workers blamed the dwindling fortunes of the 40-year-old monument on negligence and corrupt practices of past managers.

Ben Akabueze, Director General, Budget Office, recently announced that the assets would be sold to generate revenue to finance the country’s budget for the next three years.

The inscriptions on the placards included: “National Theatre can work, we need repairs and not sale.’’

Akogun said that corruption and bad management were responsible for the bad state of the monument.

“If the challenges in the system are tackled, the National Theatre can work effectively and generate funds.

“We need managers that will help us attract patronage rather than promote its sale,’’ he said.

Durosimi said that RATTAWU was not in support of the proposed sale and would support AUPCTRE’s decision to campaign against it.

The National Theatre has seven banquet halls that could accommodate between 650 and 5,000 and all the lights, water and air-conditioners were functioning effectively.

The management has further employed security guards, including Civil Defence personnel, to secure the environment.

However, reports that the premises were overgrown with weeds.