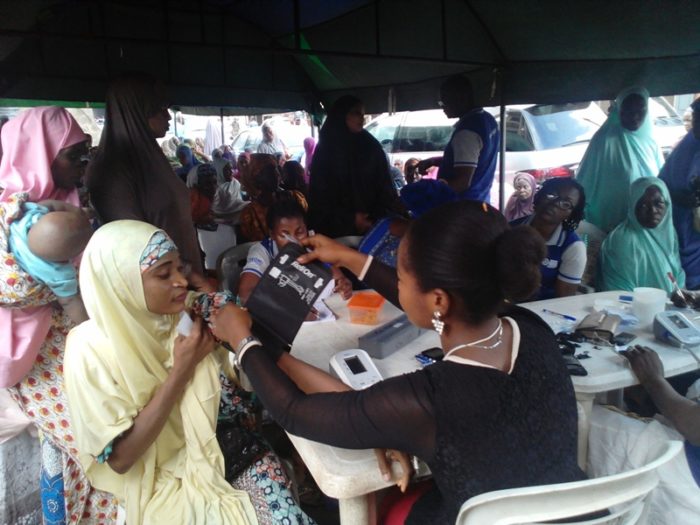 The one day event, which had about 10 doctors including Adenike Osinusi from USA, and twenty paramedical personnel, was held at Naomi Hospital situated at Oke Padre Area of Ibadan.

Behind the programme are five University College Hospital, UCH, Ibadan trained medics, four of which are now based in USA: Dr. Francis Ayo Obuseh, a retired major in US Air Force and an International Health Specialist/Epidemiologist, Dr. John Louis-Ugbo, an Orthopaedic Surgeon with Emory University, Atlanta Georgia; Dr. Benjamin Blagogee, a Family Medicine/ Occupational Health Consultant from Wisconsin, Dr. Tolu Aduroja, a Psychiatrist with the University of Alabama at Birmingham and his brother, Dr. Biola Aduroja, Medical Director of Naomi Medical Centre.

Among those attended to were over 10 Sabo residence female Hausa patients discovered to be suffering from tuberculosis, 15 fibroid patients and one 60 year old breast cancer patient. All of them have been referred to UCH and General Hospital, Adeoyo for appropriate treatment.

However, about 15 Hernia and 10 appendix patients have been scheduled for surgical operations at Naomi Hospital. Other ailments are: virginal Hysterectomy, Lipoma, Hydrocele, Trisomy 21 otherwise known as Down Syndrome, malaria and hypertension, which had the highest number of patients.

Speaking on the programme, Dr Aduroja lamented the attitude of the Nigerian government to the health of the masses saying, “Nigerian government is not doing well at all for its people when it comes to healthcare. I feel sad whenever the political office holders travel abroad to access best healthcare and they cannot provide basic health to their people.

“There was a nursing mother who has it. Let me use this opportunity to appeal to the Oyo State government to see what could be done for the residents of Sabo in Ibadan by carrying out a tuberculosis test on them because most of the women who tested positive for tuberculosis are from Sabo”.

He continued, “I also need to point out that there is poverty in the land. If you have money to feed yourself well, you will have good immunity that can fight whatever sickness that is coming”.

Aduroja assured the tuberculosis patients that have been referred to UCH and General Hospital, Adeoyo that his team would partner with those hospitals to ensure that they get the best treatment.

He said that his team would not stop the yearly programme because that is part of the ways they could give back to the country that has trained them to be medical practitioners saying, “Our love for our people is the major factor that is responsible for the sustenance of this medical outreach. We are happy that in our little way, we are providing access to good medical care to the indigents. Health is more important than money. Good health surpasses all the money you have.

“If the co-founder of Apple, Steve Jobs can buy pancreas for $3m, he would have bought it but he was not able to, even with all the money. That shows the importance of health. That is why we have made up our minds that every year we have to come home for this programme”.

PDP Is A Leopard That Cannot Change Its Spots – APC