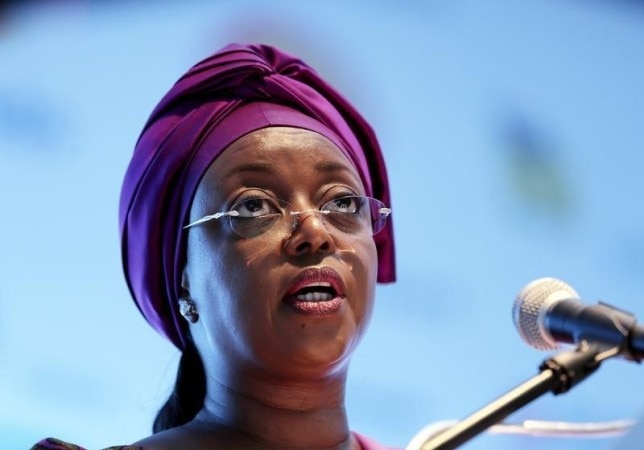 In 2017, the Economic and Financial Crimes Commission (EFCC) sure had its hands full unraveling unbelievable corruption stories back-to-back.

President Muhammadu Buhari rode to power on the back of a promise to crack down on endemic graft in Africa’s most populous country.

In keeping with that promise, Ibrahim Magu was retained as acting EFCC chairman by the administration even after parliament twice refused to confirm him for a substantive role.

However, the opposition has often referred to the administration’s anti-graft war as a witch-hunt.

Below are the corruption stories that kept Nigerians talking all through 2017.

Nigeria’s former petroleum resources minister, Diezani Alison-Madueke was hounded at home and abroad for a raft of corruption allegations all through 2017.

In August, a court forfeited a $37.5M Banana Island mansion allegedly belonging to Diezani, to the federal government.

A slew of other properties located in Yaba, Ikoyi, Port-Harcourt and Abuja worth billions of naira—and which allegedly belonged to Diezani–were also forfeited to the federal government.

The United States Department of Justice also sought to recover $144M in assets and cash from Diezani and her cronies.

Nigeria’s former minister has been holed up in a London apartment since 2015; from where she continues to honour court invitations from the UK authorities.

Nigeria’s Senate President, Bukola Saraki, was finally cleared of corruption charges in June of 2017 by the Code of Conduct Tribunal (CCT).

It was the culmination of a long drawn legal battle between Saraki on one hand and the federal government on the other.

Saraki had been hauled before the courts on a 13-count charge bordering on false declaration of assets and money laundering, soon after his emergence as senate president.

In 2017, Saraki’s name also prominently featured in the Paradise Papers.

The Paradise Papers are a chunk of documents detailing how politicians, celebrities and government officials around the world, float offshore shell companies as a tax evasion tactic from their home countries.

Sacked from the federal civil service in 2013 for allegedly fleecing pensioners of billions of naira in entitlements, Borno State born Abdulrasheed Maina somehow found his way back to the government payroll in 2017.

The former boss of the presidential pension reform task force was labelled “the pension thief” in the local press in 2017.

Maina’s civil service reinstatement was enough ammunition for those who would rather hold up the Buhari administration’s anti-corruption posture as a huge joke.

On October 23, 2017, an embarrassed president fired Maina from the federal civil service as government officials and ministers continue to trade blames over his return.

He has been issuing statements proclaiming his innocence, from abroad.

On October 30, 2017, President Buhari fired Babachir Lawal from his position of Secretary to the Government of the Federation (SGF).

In May, a senate committee had indicted Lawal of corruption and conflict of interest as it pertains to a grass cutting contract in the war ravaged north-east region of Nigeria.

Lawal was alleged to have awarded a N500M contract to clear invasive grass species, to companies in which he retains considerable interest.

A presidential panel headed by Vice President Yemi Osinbajo endorsed the senate’s position and Lawal was replaced by Boss Mustapha as the nation’s SGF.

Oke’s life was never the same again after N13B in cash was discovered in an Ikoyi apartment in April of 2017.

Oke was Director General of the National Intelligence Agency (NIA) when the money was found. The nation’s chief spy claimed the cash haul on his agency’s behalf.

Following the recommendations of a presidential panel, Oke was fired as DG of the NIA on October 30, 2017.

In April, a federal high court sitting in Lagos, ordered the Economic and Financial Crimes Commission (EFCC) to unfreeze the bank accounts of Nigeria’s former first lady, Patience Jonathan, where the sum of $5.7M sat pretty.

It was a trial that commenced in 2016 but which held the nation’s attention for most of 2017.

The court has since suspended proceedings on the case, ruling that the money lawfully belongs to Mrs. Jonathan.

Acting on a whistle-blower’s tip, operatives of the EFCC discovered $9.8M in cash concealed in a Kaduna bunker.

The money had Andrew Yakubu—a former Group Managing Director (GMD) of the NNPC–written all over it.

The former NNPC boss told law enforcement that the money was gifts from friends.

Yakubu was subsequently arrested and remanded in prison.

In March, Yakubu was arraigned on a six-count charge bordering on fraud.

The EFCC is yet to prove that the money belongs to the federal government.

In 2017, 48-year-old Kola Aluko made the news as a henchman and crony of Diezani Alison-Madueke.

It is alleged that as petroleum resources minister, Diezani entrusted Aluko and Jide Omokore with the task of acquiring property and laundering money across the world on her behalf.

Aluko allegedly owns a New York penthouse worth $36M and luxury property across the world. He also reportedly hires luxury yacht for fun.

In July, the Daily Beast referred to Aluko as “the crooked playboy who courted Naomi Campbell, threw a birthday bash for Di Caprio and rented a yacht to Beyonce”.

The other half of Aluko who allegedly worked in cahoots with Diezani to fleece Nigeria of billions of dollars in crude oil proceeds.

In 2017, Omokore who is the Chairman of Atlantic Energy Drilling Concepts Limited, was in and out of courts on allegations bordering on corruption and crude oil theft.

Arrested in 2016 over an alleged illicit contract worth over N400M, the trial of former PDP spokesperson, Olisa Metuh, continued to hold the nation’s gaze well into 2017.

In October, Metuh solicited Goodluck Jonathan’s help in the form of a star witness, but the former president asked Metuh to cough out N1B in transport fare, hotel accommodation and logistics if he wanted him to testify on his behalf in court.

Metuh has collapsed in the course of his trial, lost weight and grown a grey beard.