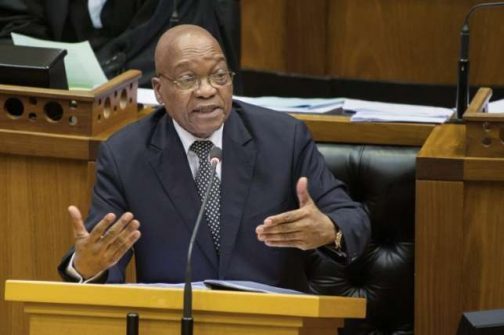 President Jacob Zuma of South Africa has filed an appeal against a court ruling that his appointment of a state prosecutor to decide whether to reinstate corruption charges against him was not valid, local media reported on Thursday.

The High Court ruled on Dec. 8 that Zuma’s appointment of head prosecutor, Shaun Abrahams should be set aside immediately and that Deputy President, Cyril Ramaphosa should appoint a new public prosecutor within 60 days.

The ruling was among a series of judicial blows to his administration, which has been hit by a series of scandals.
Zuma filed papers saying that people exercise presidential powers at the same time, according to television station eNCA.

The National Prosecuting Authority (NPA) has also said it will appeal the ruling.

In October, the Supreme Court of Appeal upheld an earlier decision by a lower court that the nearly 800 corruption charges filed against Zuma before he became president be reinstated.

It then fell to Abrahams, appointed by Zuma, to decide whether or not the NPA would pursue a case against him.

The charges against Zuma relate to a 30 billion rand (2.22 billion dollars) government arms deal arranged in the late 1990s and have amplified calls for Zuma to step down before his term as president ends in 2019.

Related Topics:President Zuma Appeals
Up Next

Top 10 corruption stories of 2017 in Nigeria