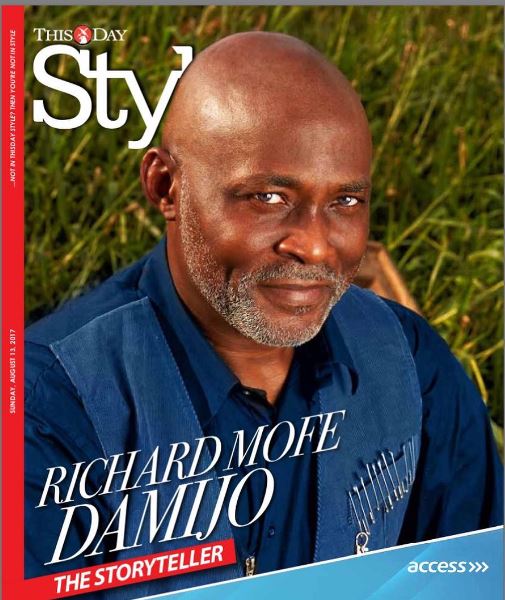 The star was shot by renowned photographer TY Bello, who shared a personal message as she shared more photos of the movie star.

My portraits of our amazingly handsome@mofedamijo are out for the cover of today’s @thisdaystyle. He was interviewed by @duchesskaykay and styled by @gypsyelvis

The first thought I had about his portraits was water.. and school.. and then Makoko .. I killed the idea thinking it was way too random opting for a sleeker shoot at a friends house with a water front .. I was going to borrow a seriously lit boat and make some really smooth images.

Until my friend @msabisoye Invited me for the launch of her new space for @pearlsafrica and GirlsCoding where she and her team teach young girls from underserved communities how to write codes.

This was where I saw Sharon .. this young girl with an amazing smile that came forward and made a beautiful presentation ..standing confidently right in front of Mrs Oby Ezekwesili.
Sharon lives in Makoko a fishing community built on the Lagos lagoon. She spoke about trying to solve the problem of food insecurity by building a website using the knowledge from GirlsCoding, for fishermen to display their goods so people outside the community could buy. She also spoke about using technology to help solve child malnutrition.

She was beautiful to watch and the first words that came to mind were, this girl is a star. I was shooting RMD the next day and I switched to my initial idea to shoot in Makoko. I had to find an excuse to photograph her. I called my friend @otto_orondaam founder @slum2school knowing he had very strong presence in the Makoko community .. he hooked me up with the necessary contacts within a couple of hours. Coincidentally, Sharon was also a beneficiary @slum2school.

It was a joy to watch Richard Mofe Damijo share the lime light with this beautiful star from Makoko . .. another big coincidence was that 80% of the movie he was producing next was going to be shot in that same space. I concluded this was no coincidence at all ..Providence had brought it all together .. When I asked RMD if he was a good swimmer as he would not have a life jacket on the canoe..he replied ‘ No be Warri boy I be .. ?Na inside water dem take born me ‘.. #tybellophotography #thisdaystyle