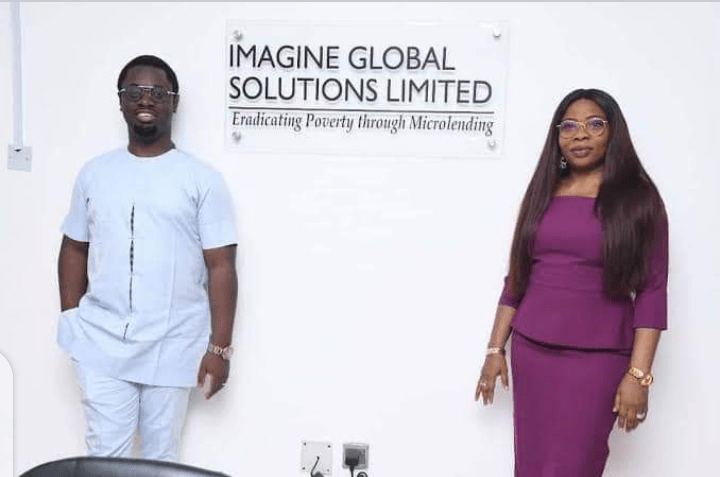 Last weekend, news broke on social media about a couple who had allegedly conned investors, defrauding them of an estimated N22 billion.

Bamise Samson Ajetunmobi and his wife Elizabeth Ajetunmobi both founders of Imagine Global Solution Limited, an investment company based in Lagos Nigeria are said to be on the run with a bounty set for anyone who can locate them.

Several investors of the company took to social media alleging that the company defrauded them of investment which they placed in the hands of Imagine Global Solutions Ltd in exchange for high returns. A WhatsApp group and a Nairaland forum have also been set up for victims of the scam to work together in recouping their losses.

Some of the investors are said to be members of different churches in Nigeria, including Daystar Christian Centre and The Elevation Church.

PiggyVest was also said to be a victim.

However, TEC and PiggyVest had promptly denied the allegation by coming out with statements.

Different people have taken to social media to reveal their ordeals.

One of them said his friend invested N20 million, asking how he could join the WhatsApp group for victims.

Another investor stated that he invested N69.5 million.

Another person said: “A friend’s company invested 1 Billion. And their office is currently locked. She told me this week, no trace of them yet.”

A woman mentioned that her husband invested almost N90 million.

Another woman stated her husband, who was a senior colleague of Ajetunmobi when they were in Zenith Bank PLC, had invested almost N30 million.

While revealing that she knew many people who invested in Ajetunmobi’s scheme, added that the man last week stopped picking her husband’s phone calls.

She added: “One guy resigned from Zenith bank due to plenty of returns he was getting from the investment, he raised 500 Million from different people. Now the guy has been suicidal….I heard they (Bamise and Elizabeth) bought a big house at Banana Island also.”

Latest information however has it that the couple, with a home in highbrow Banana Island in Lagos State, and known for going for expensive trips, no longer live Nigeria.

They are believed to be in the United Kingdom.

What we have learned so far:

1) Bamise Samson was a quiet banker who quietly did his job as a Zenith bank staff. He was with the bank for 8 years before he left to start his Image lenders startup in 2016.

Before he joined the bank, he was a graduate of Banking and Finance, from Madonna University Okija.

2) When Bamise set up his business in 2016, his first customers were his former colleagues, he was able to convince his colleagues in the bank to trust him with their funds in lieu of a 10 % monthly ROI payment.

His first investors saw their money paid promptly on time, those investors helped the young alleged scammer to spread the word that there is a new king in town who is trustworthy and a breath of fresh air.

Before one could say, Jack Robinson, Investors started flocking around Bamise with their money in return of a regular monthly payment from his company.

Even branch managers of commercial banks flocked to Bamise with their life savings.

Zenith bank staff were his marketers and foot soldiers.

A lot of them convinced customers that they were managing their account to invest with Bamise.

Because of this headstart of having your former colleagues in Zenith bank brought and convinced customers for your business, Bamise did not invest in media branding neither did he need social media influencers to influence for him online.

This is why his business was not popular on social media, only few people like myself knew about his business before now.

I knew him before now because a zenith bank staff told myself and Ndiya Baykay Eze Eze about him.

Bamise’s phone rang non stop from investors, convinced by his former colleagues in the bank and those callers want to invest their money with him so what is he doing with social media influencers?

3) Seeing that his fortunes and investors money with him have quadrupled, Bamise went to lure his old colleagues at Zenith bank to join him in his new startup.

He poached a lot of Zenith bank staff by offering mouth-watering salaries they could not resist and most times, double of what they earned at Zenith bank.

Because of this, a lot of Zenith bank staff resigned in droves to join Bamise in his wild goose chase and to be fair to them, they did not know what they signed up for.

He needed the validation that Zenith bank staff are working for his startup, to convince investors that he was real.

Boy! Bamise paid crazy salary salaries to his former colleagues who resigned to join him.

Imagine earning 200k per month in Zenith bank only for Bamise to offer to pay you 1 million naira. You don hit gold mine be that.

4) With his consistent monthly payment to his investors, Bamise had this brainwave: why not open Image lenders office abroad to cater for Nigerians in the diaspora who have been making enquiries on how to invest with his business in lieu of monthly ROI payment?

Image Lenders offices in China, Ghana, Dubai, South Africa and London were born and these offices were set up to attend to only Nigerians in diaspora who wish to invest in his business with their funds for monthly payment.

5) As the investor’s money with him grew, to an excess of $ 50 million dollars at the last count, the young man knew he had to change his lifestyle to reflect his new status.

He bought a duplex at Ned Okonkwo’s Victoria crest project in Lekki Lagos and paid cash up front, he is now a big boy so money is not a problem.

The only problem is how to spend it.

He also bought a house in UK and Dubai, to reflect his new status as a billionaire.

6) To also reflect his status as a man of means, a man of Timbre and calibre, Bamise also bought a citizenship passport of Antigua and Barbuda for his wife, himself and his two kids.

He was even a worker with the church and does not miss Sunday service except he is not in Lagos.

As a child of God, his monthly tithe runs into millions of naira and was one of the biggest spenders in Sam Adeyemi’s church

God has blessed his hustle so he needs to show his gratitude by giving back generously to the church and he did on a scale never seen before.

8)Elevation Church in Lekki was one of his investors. Godman Akinlabi, the senior pastor of the church invested over 500 million naira with Bamise in lieu of a 10 % monthly payment.

9) Bamise was a sweet talker, his innocent looks, his love for God and the fact he has a background in finance influenced his investors to trust him with their money.

10) At the end of the day, the monthly ROI payment was not sustainable and the fact that Bamise was living a luxurious life on Investors funds, so the business with so much promise crashed like a pack of cards, just like other Ponzi businesses before it.

11) Piggyvest has nothing to do this with failed Ponzi scheme business that Bamise ran so I don’t know why some of us are spreading the false news that Piggyvest invested over 2 Billion with Bamise, causing panic for Piggyvest customers. It is not good ooo.

12)Such a sad story. I hope that Bamise and his fleeing wife are tracked down soon so that they can refund the investors the money that they ran away with.

Attached in the picture is Bamise, his dear beloved wife and his beloved pastor, Sam Adeyemi of Daystar Church.

She is a member of CIPD(UK), Member, ILM(UK) and Teacher’s Registration Council of Nigeria.

She is a WIMBIZ mentor and has been featured on TVC news as well as a guest columnist on BellaNaija where she shares insights on how to build a mutually beneficial relationship between a domestic staff and their employers.