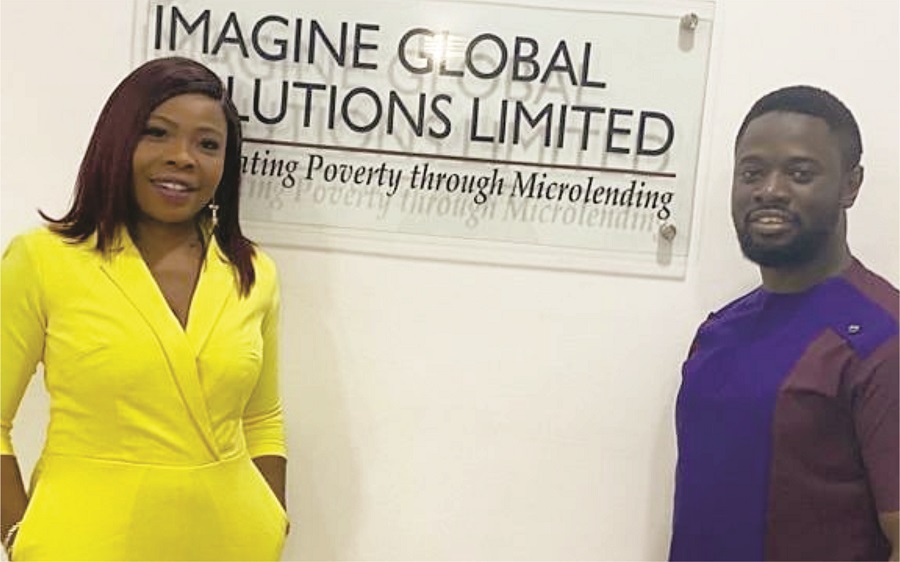 The company was founded by Bamise Samson Ajetunmobi, an ex-banker who is now on the run.

The company which claims to provide “investment banking, advisory and micro-lending and brokerage services in Nigeria and Africa” is said to have received over N20 billion from high yield-seeking investors promising returns as much as 10% monthly. Investors in the fund were told that the money was invested in a boutique of investments ranging from real estate, bonds, forex, equities, etc.

However, it appears the company may have been perpetuating a large-scale Ponzi scheme which by our records is on track to be one of the biggest in recent history. Nairametrics gathered information from multiple sources, including victims of the alleged Ponzi Scheme revealing an enthralling tale of how the promise of higher returns found favour in the pockets of yield-seeking individuals and institutions.

Some of the early investors in Imagine Global Solutions Limited reveal how a little-known ex-banker started what was then thought of as a money lending business. Ajetunmobi started his business by pooling money from colleagues and friends and then lent the money to traders and market women looking for soft and unsecured loans.

As the business took off, he resigned from the bank to face it full time. Ajetunmobi’s allure was his ability to pay investors their returns monthly without a miss. This created more confidence within early investors allowing them to keep rolling over their investments. As the returns remained consistent, early investors increased their investment size. With time, others pooled funds from smaller investors promising them returns lower than what Ajetunmobi offered allowing them to keep the delta. Others simply just charged fees by acting as agents for investors and Imagine Global. The glue was the monthly interest payments.

Within 5 years, his investor base had grown from about 30 investors to over 90,0000, according to information contained in an investor pitch created by the company and seen by Nairametrics. Loan portfolio also grew from about N5 million to about N11 billion within this period. These were unprecedented numbers by any standards yet investors found no reason to doubt it. Imagine Global was still paying its monthly returns, so there was no reason to worry.

As the company balance sheet grew in size, they packaged the business as a full-fledged investment powerhouse claiming it provided investment banking, advisory and micro-lending services in Nigeria and Africa. It also claimed to own offices in the UK, USA and Canada. IMG had ambitions that also met the appetite of its investors. They wanted to become the biggest moneylender not just in Africa, but in Eastern Europe and South Africa, setting a ten-year target. Such ambitions give investors even more reason to invest more, after all, scaling was an important growth story a founder had to propagate.

In one offer made to investors, IMG pitched for a minimum investment of N100 million in exchange for a return of between 18% to 36% per annum “depending on the capital amount” while a 6-month note attracted 6 to 9% per annum. An investment note seen by Nairametrics was even more generous, it offered 10% per annum as recently as June 2021.

IMG claimed its business model was based on 4 key metrics. Using his microlending subsidiary, TFS Finance Ltd, they target “traders who sell fast-moving goods daily”, conduct “due diligence”, disburse the loans often between N10k and N100k over a 30-40-day cycle. Repayment is collected a day after the loan is disbursed through daily repayments.

Microlenders claim familiarity with this process but explain that default rates for this sort of loans can be as high as 30%. Thus, there was no way he could have sustained paying his investors high returns on their investment without dipping into capital. Sources indicate, Bamise often touted a default rate of less than 5%.

Nevertheless, investors piled in on IMG, investing in its microlending story in exchange for high-yielding returns. For early investors, the decision was a no-brainer. They had received so many consistent returns, the cumulative amount was much more than the original capital invested. For others who came later, they weren’t so lucky, a typical feature of most Ponzi schemes. IMG and its various subsidiaries had much more old capital than new money setting the stage for the collapse of the scheme.

Emmanuel Abaji, a banker with one of the country’s tier-1 banks, who spoke with Nairametrics said that despite all the warning signs, it is quite easy and understandable for people to fall for Ponzi schemes.

“If you live in a country where legit investments hardly yield much and businesses often struggle to survive, it is easy to fall for a scheme that promises you a high yield, especially when you actually know someone who had invested and received his or her yield from the company,” Abaji said.

Ajetunmobi had also developed an opulent lifestyle, living in high brow neighbourhoods in Lagos, buying houses abroad and splurging on expensive cars. He also purchased citizenship of West Indies countries shoring up his status of a high net worth Nigerian. Frequent travels overseas, donations to churches and other philanthropic activities were also a common pass time as is often the case with Nigerians who have “arrived.”

It came crashing down

The first sign that things were going awry for investors started in August 2021, when Ajetunmobi failed to pay investors any return. In a country where returns on investment are mostly single digits, Imagine Global hardly missed payments of its monthly returns ranging between 5% to 10% per month. Even in the dark days of the Covid-19 lockdown, Ajetunmobi never missed a payout.

So, when investors did not see the accustomed alerts, they grew worried prompting a showdown meeting with some of its major investors. Ajetunmobi operated a sophisticated network of investors ranging from institutions that had billions in pooled funds invested to individuals with tens of millions invested directly into the fund.

The missed payment in August triggered an emergency meeting between Ajetunmobi and his largest investors who needed answers for smaller investors to who they were answerable. At the meeting, investors probed the management of the company over the missed payments demanding that the company provide a statement showing where all the funds have been invested. Ajetunmobi insisted that the missed payment was a blip and that things will quickly return to normal by September. For the first time, investors suspected something was terribly wrong but took solace in Ajetunmobi’s assurances of a return to normal in September. They had no choice but to wait.

By September, the alerts once again did not drop forcing yet another string of meetings with Mr Ajetunmobi. By then, it was obvious that the company was facing serious challenges in meeting its monthly payments. Still believing the funds were invested genuinely, investors suggested that he cut rates from 10% to about 3%, a logical sacrifice if it meant that they at least get their capital back. Mr Ajetunmobi cut the interest rate to 7%, promising to make things right by October 1st.

By October 2nd it was obvious investors were on the hook for a third consecutive month of zero returns on their investment. An investor who could not stomach the excuses any longer got a few policemen and stormed the residence of Mr Ajetunmobi in an apartment in Ikoyi, a high brow neighbourhood in Lagos, often occupied by extremely rich people. The investor had over a billion in the scheme and wanted to apprehend him in a sting. Unfortunately, they could not breach his gate despite several attempts giving Ajetunmobi heads up to make a move. That was the trigger Ajetunmobi needed, and realizing he was out of options, took off very early the next morning and has not been seen since then.

As the days flew by, investors who had their money indirectly invested through proxies started asking for their returns and their capital. It was not immediately obvious that they were victims of a large-scale Ponzi. After all, savvy investors like Microfinance banks, investment houses, FinTech companies and even Churches are said to have invested in the fund. This could just be a short-term problem, they thought.

A WhatsApp group for investors in the scheme swelled with members providing any useful information they could get in their bid to recover their money. As it became obvious their money was not coming back any sooner, many took to Twitter and other social media platforms to reveal what is now arguably a sophisticated scam that may have cost investors billions of naira in savings.

Where are the regulators

As Nigerians flock to social media to complain and take solace in themselves, there is yet to be no official statement from regulators. TFS Finance Ltd, IMG’s microlending subsidiary is regulated by the Central Bank of Nigeria. The apex bank is yet to issue any statement on the status of the licensed micro-lending institution. Players in the market who pleaded anonymity for fear of being singled out by the regulator claim CBN auditors ought to have flagged this company early on if they followed through with their stringent reviews.

The Security and Exchange Commission, SEC, also shares regulatory oversight. They approve any scheme that solicits funds from members of the public. And in cases where this is not clear, they have powers to investigate such organizations. SEC has often issued notices to Nigerians warning them against investing in Ponzi Schemes. In April 2020, SEC listed 12 companies accused of running Ponzi Schemes. SEC DG, Lamido Yuguda just recently issued another warning against Ponzi schemes lamenting that Nigerians lose money daily to Ponzi schemes despite repeated warnings.

Prime Minister of Antigua and Barbuda threatens to arrest the couple

Even though their whereabouts are yet to be confirmed, Ajetunmobi and his wife are reported to have fled Nigeria to the West Indian country of Antigua and Barbuda where they are said to have purchased citizenship.

With Adetunmobi’s Imagine Global out of the way and investors counting their losses, there’s no telling how many more Ponzi schemes are still out there waiting to crash and how many more will spring up with the usual promises of supernormal profits.

Abaji advises investors to take adequate steps in doing some research about companies that make promises of returns on investment way higher than industry standards with little risk. He adds that intending investors would be wise to always reach out to regulators such as the Security and Exchange Commission to confirm the status of such companies before doing business with them

Related Topics:Imagine Global Holdings
Up Next