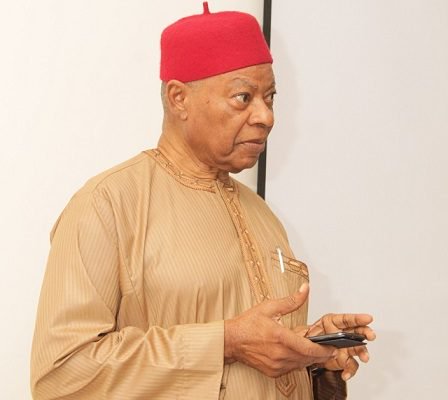 A former Nigerian Permanent Representative to the United Nations, UN, Arthur Mbanefo has claimed that Igbo people are “shaking” because of the quit notice by Arewa youths asking them to vacate the north.

Mbanefo, who is an ex-Chairman of State and Local Government Creation Committee during the regime of late General Sani Abacha explained that Igbos are shaking because they are interested in wealth.

The elder statesman made the remark while addressing journalists at his Onitsha country home, Anambra State.

He also urged Biafra agitators to concentrate more on clamour for restructuring of the country than on agitating for Biafra because the “referendum they are talking about is not only very expensive but very difficult to come by.”

According to Mbanefo, “The northerners had just made a simple statement and Igboland is shaking, because we are interested in wealth. We got worried over anything that affects our wealth. ”

A coalition of Northern youths had recently ordered Igbos to vacate their region by October 1, a situation that has caused so much controversy in the country.