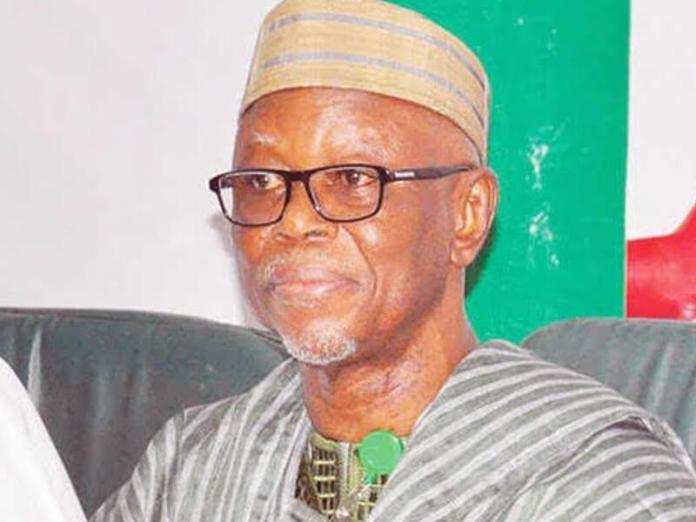 Oyegun’s challenge came just as the chairman of the PDP Peace and Reconciliation Committee and Bayelsa State governor, Mr. Seriake Dickson, disclosed that the party has initiated moves to reconcile aggrieved members who lost out at the Saturday convention of the party.
Also addressing journalists yesterday, the newly elected National Vice Chairman, Southeast, Chief Austin Umahi, said the party would resolve, once and for all, the crisis rocking its Anambra chapter.

Oyegun who congratulated Secondus for his victory said he was ready for a robust engagement with the new PDP chairman, noting that he believed this could be done without acrimony and rancour.
In a statement yesterday, the APC chairman said he expected a responsible opposition that would ensure stable democracy in the country.

He said: “I assure the PDP national chairman of my willingness to engage him robustly in an atmosphere devoid of acrimony and rancour. I believe that working together we can both elevate the language and temper of politics in our country, thereby providing the enabling environment for democracy to thrive in our country.
“It is my hope that the newly-elected PDP national chairman will use his experience garnered over the years to ensure that the PDP assumes its role as a responsible opposition party in the country.

“Our party wholeheartedly welcomes opposition because we believe that democracy cannot thrive without a vibrant but responsible opposition that puts the nation first. This will often challenge you to balance partisan interests with overall national considerations.”

Also, in a bid to stave off a crisis arising from last Saturday’s national convention, the PDP Peace and Reconciliation Committee has swung into action, trying to make peace with those that were aggrieved over the outcome of the exercise.
Dickson said his committee was going to visit Chief Bode George and other chairmanship aspirants from this week.

Speaking to journalists at the Bayelsa Lodge in Abuja Monday night Dickson, said the initial contacts they made with the aspirants were positive, adding that everything possible would be done to assuage the aggrieved ones.

He said the committee had already established contact with George, adding that there was no doubt that the talks would be fruitful.
According to him, “Generally, we are pleased with the outcome of the exercise (convention) but we have established contact already with those who are dissatisfied and who have concerns, issues and grievances which is normal in an exercise such as this.

“We have made efforts to establish contact with all the chairmanship aspirants. And we intend to interact with all other aspirants for various offices, with a view to promoting an amicable resolution and better understanding within the PDP family.”
He said in the next couple of weeks and months, there would be a lot of action in this direction. He said members of the committee would from tomorrow commence visits to the chairmanship aspirants to see how the issues can be sorted out.

Dickson appealed to all party members and leaders to apply caution in their utterances henceforth so that the reconciliatory efforts can take root.
On his assessment of the convention, the governor said that it was by far a better exercise, different from what had been witnessed in recent history.

Asked whether the committee would talk to those who had left the party, he said the mandate of the committee included reaching out to former PDP members and to appeal to them to emulate former Vice-President Atiku Abubakar and return to the fold.
Meanwhile, the party’s new leadership hit the ground running on its new power decentralisation policy, directing the National Vice Chairman (Southeast), Chief Austin Umahi, to take immediate steps to resolve the crisis in the Anambra State chapter.

While speaking on the decision of the party on the state chapter, Umahi said the new national leadership was determined to restore sanity in the state, warning that henceforth anyone who causes trouble would be shown the way out.
He said: “We want to revisit and regain Anambra State. We will be holistic in our approach. What happened in the last election was as a result of PDP fighting itself and what I call the pull-him-down syndrome.

“It is not that PDP is not in Anambra. It is a result of the intrigues and people bent on pulling the PDP down in Anambra because of their selfish interests. But we are saying enough is enough. This rascality must stop and we must get it right.
“And that is why as a zone, we have decided to take a position. The position is that the state congress in Anambra is suspended. We just have to go back and do the right congresses and constitute the right State Working Committee. That is the way to go in Anambra State.

“In a couple of weeks, you will see a properly constituted working committee in Anambra State.”
The party, in addition, denied reports that the South-west had been sidelined with the outcome of the convention, saying this perspective was APC propaganda to set the region against the PDP.
A statement by the Deputy National Publicity Secretary, Prince Diran Odeyemi said as a national party every region has representatives with equal rights and privileges in the National Working Committee.

It noted that the PDP, being a truly national party, holds the South-west in high esteem and recognised its contributions in keeping alive its ideals.
It however blamed the activities of some aspirants from the zone for their inability to clinch the position of national chairman, stressing that it would be a lesson in the future for politicians from the region.
It said the South-west was not only fully recognised in the party but was also expected to play a critical role in returning the party to power in 2019.