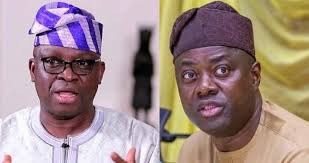 Makinde and Fayose are engaged in the leadership position right of the party in the South-West and there have been altercations between the two on this.

Oyelese said it was worrisome that Secondus was feeling unconcerned about the lingering crisis between the two PDP leaders in the South-West while accusing him of encouraging factions which was tearing the party down.

He said apart from the crisis between Makinde and Fayose, there was no friendly atmosphere in any state chapter of the party in the region, saying this might make it impossible for the state to retain the only state it won during the 2019 elections.

The former minister, who is a leader of the party in Oyo State said in a statement on Tuesday that it appeared that Secondus was more concerned about his second term in office than welding the party together.

Oyelese said, “There is hardly any state where there is amity among the members except in those areas where the leaders of the party are handling the situation with maturity. In this kind of situation, it is quite unimaginable that the chairman of the party will maintain such an undignified silence in the face of serious danger.

“It is daily becoming clear that the party is being torn apart by the same individuals who are expected to weld it together. The issue of party organisation does not appear to have much meaning to the chairman as he appears to take a special interest in encouraging factions.

“The situation we have in the South West which appears intractable is needless and should not be allowed to fester any further. The politics of survival and assertion currently going on is not in the best interest of the party as the loyal members stand to lose out.

“With the current position of things, there is hardly any state that the PDP can be sure of winning in the South West in upcoming elections. Political neophytes and dreamers may think and say otherwise, but the reality is stark enough to the discerning ones.”

The former minister asked the national chairman of the party to reach out to the founding fathers of the PDP from the South-West and seek their inputs on how to resolve the crisis.