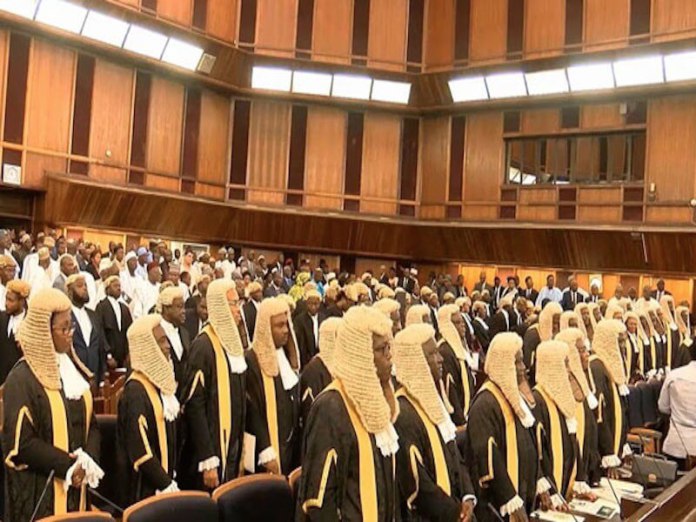 Senior lawyers in the country have commended the justices of the Lagos Division of the Court of Appeal for upholding the principle of separation of powers when they held that a serving judge could not be prosecuted until such judge had either been dismissed or compulsorily retired by the National Judicial Council (NJC) for alleged corruption.

The justices of the Appeal Court on Tuesday consequently struck out the corruption charges filed by the Economic and Financial Crimes Commission (EFCC) against a serving judge of the Federal High Court, Justice Hyeladzira Nganjiwa.

The judgment, which has far-reaching consequences, has been the subject of discussion among top lawyers in the country.
But EFCC, in its reaction shortly after the ruling on Tuesday, vowed to head to the Supreme Court to upturn the judgment, terming it a dangerous precedent that has no basis in law.
However, a former president of the Nigerian Bar Association (NBA), Mr. Olisa Agbakoba (SAN) who spoke to THISDAY on the issue said the Appeal Court justices had upheld the doctrine of separation of powers.

“The court has not said that judges cannot be prosecuted. It has only said that the National Judicial Council (NJC) is constitutionally authorised to make the decision that will lead to their prosecution.
“That is the correct position, I entirely agree with that decision. So many Supreme Court cases back it up.
“Where a panel is set up to investigate a person constitutionally, that panel will have to first deal with the matter and recommend whatever punishment that is appropriate.

“The power to discipline a judge does not rest with the EFCC, the power to prosecute a judge rests with the EFCC upon the recommendation of the NJC.
“The judgment absolutely has implications for the separation of powers. The judgment confirms that executive interference in the judiciary will no longer be tolerated. That is what the judgment says,” he explained.

Another past president of the NBA, Chief Wole Olanipekun (SAN) said the judgment had raised new issues.
He noted that the judges were now being prosecuted through a procedure hitherto un-witnessed in the annals of the judiciary – the raid of their respective residences by the security agencies.
According to Olanipekun, “The issue is recondite. It is novel. It has never happened before.

When you weigh all these against the clear provisions of the Constitution as to the roles, the position, the jurisdiction, the powers of the NJC to employ, to discipline, to reprimand, to sanction, to suspend, to promote, to hire and fire judges, then you will see the more recondite nature of the issues involved.”
He commended the creativity of the lawyers of the appellant, saying that that is the way it should be.

“The law evolves, it is never static. But to my mind, it is an issue that will definitely get to the Supreme Court. Let the Supreme Court have the final say on it.”
He also commended the courage of the justices of the Court of Appeal, adding that the judgment was not something that could just be dismissed by the wave of the hand.
He urged both the prosecution and the defence to prepare to further argue the case at the Supreme Court.

“My advice is let us keep our fingers crossed while we encourage the parties involved to prepare for fireworks at the Supreme Court,” he added.
Olanipekun also advised lawyers to stop condemning judgments without reading them.
He observed that the Constitution provides for the way and manner through which elected executive officers such as the president, vice-president, governors and their deputies, as well as members of the legislature, can be removed from office, pointing to the impeachment process for the executive and recall process for lawmakers.

Also reacting, Chief Mike Ozekhome (SAN) said the judgment was in tune with the Constitution.
According to him, the judgment satisfied the doctrine of separation of powers.
He said: “I totally hail the judgment of the Court of Appeal delivered on Tuesday as being jurisprudentially correct, being constitutionally right and meeting the end of justice.

“Particularly because it satisfies the hallowed doctrine of separation of powers ably propounded by great philosophers such as Aristotle, Socrates, Plato, Thomas Hobbs, Rousseau, but most ably popularised by the great French philosopher Baron de Montesquieu in 1748 to the effect that there are three arms of government – the legislature, the executive and the judiciary – and that each arm of government is independent in its own realm with checks and balances.”

Ozekhome argued that using that doctrine, the Court of Appeal was right to invoke the provisions of Section 158 of the 1999 Constitution dealing with the powers of the NJC to punish erring judges before they are railroaded into the courts for criminal trials.
He said: “The power of the EFCC to try any person can be found in the EFCC Establishment Act of 2004. This Act is far inferior to the provisions of the Constitution, which gives the NJC the power and superintendency over judges.

“Therefore any conflict between the provisions of that Act which attempts to try judges who are already subject to a punitive inquisition, and punishment by the NJC, such powers are contrary to the provisions of the Constitution. By virtue of Section 1(3) of the Constitution, the exercise of those powers by EFCC are null and void.”
Ozekhome noted that even though he had not read the full judgment, he was convinced that the judgment was right both in content and principle.

“The judgment has removed the judiciary from the terrorizing apron strings of the executive that has been using the EFCC and DSS to settle scores with judges that have given judgment against them, thereby intimidating and browbeating the judiciary,” he added.
A Lagos lawyer, Ebun-Olu Adegboruwa, further observed that the decision was sound in law and logic in helping to assert the much-desired independence and autonomy of the judiciary.

He noted that in recent times, judicial officers had been under mindless attacks by the executive, arising from the expressed disaffection for the third arm of the realm (judiciary) by the president, who is the head of the executive and had stated severally that the judiciary was his headache.
Adegboruwa said: “The hallowed democratic principle of separation of powers requires that the three arms of government should be independent of each other but work together for the effective administration of the realm.

“In the present dispensation, the executive arm has totally hijacked and captured the legislative and judicial arms, both of which have not been allowed to function effectively and independently as anticipated by the Constitution.
“It is therefore a welcome relief indeed that judicial officers will no longer be under the fear and tremor of intimidation of the executive in the discharge of their official duties.

“A judge should be free to deliver his judgment according to his conscience and according to the law without fear or favour, without affection or ill will.
“Under and by virtue of Paragraph 21(b) and (d) of the Third Schedule to the 1999 Constitution, the NJC is to exercise the power of disciplinary control over all judicial officers.

“Thus, where there is an allegation of corruption against a serving judicial officer, such should be tabled before the NJC first, as it is a matter arising from the discharge of official duties by the judge.
“Otherwise, judges will become liable to do the bidding of the executive once it is possible to just pick up a judge and lock him up whenever he delivers a judgment that is not favourable to the executive.”

He, however, warned that this judicial immunity should not be a blanket one, adding: “It should only be limited to matters involving the discharge of judicial duties.
“Consequently, a judge involved in the common crimes of murder, rape, etc, all committed outside the performance of his judicial duties, should still be held accountable in the normal course of criminal justice administration.

“So, I salute the rare courage of the justices of the Court of Appeal, who have taken this landmark step to free our nation from dictators and fascists in political garb and I commend the boldness of My Lords, for rescuing the judiciary from the choking harassment of the executive.
“Since time does not run against the prosecution of offences in law, the government can always commence a prosecution against any judicial officer found wanting after the NJC has concluded its own statutory role in the discipline of such judicial officer.”

The EFCC had arraigned Justice Nganjiwa for allegedly receiving a total of $260,000 and N8.65m gratification to unlawfully enrich himself as a public official.
He was charged on 14 counts before the Lagos State High Court in Igbosere on June 23, 2017. He, however, pleaded not guilty.
When the trial commenced before Justice Adedayo Akintoye, the accused raised a preliminary objection.
The objection was overruled. He consequently appealed to the Court of Appeal.