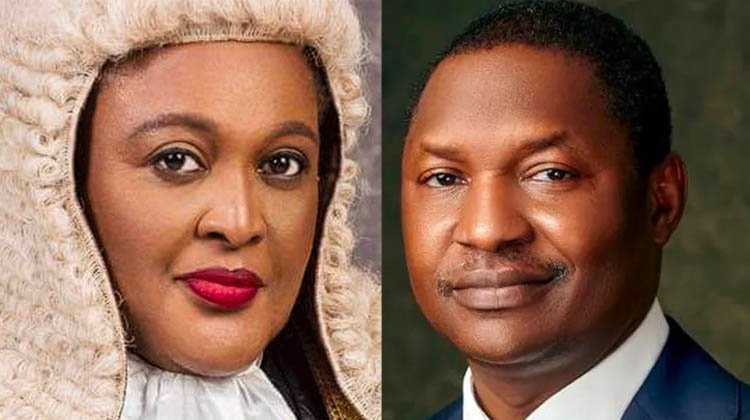 The Nigerian Bar Association has continued to fume over the invasion of the Abuja home of Supreme Court Justice, Mary Odili, by agents of the Federal Government as reported by TopNaija last week.

Olumide Akpata, the NBA President, at a special press briefing in Lagos on Friday, described the operation as egregious and the gathering of an ominous cloud over the judiciary, saying it was reminiscent of how operatives of the Department of State Services in 2016 raided the homes of seven judges and how a former Chief Justice of Nigeria, Justice Walter Onnoghen (retd.), was “illegally removed from office,” ahead of the 2019 general elections.

Apata vowed that the NBA would stop at nothing to ensure that those behind the latest operation were unmasked and punished, to put a stop to “the assault on the judiciary.”

He said the NBA would not accept the flurry of denials by the Attorney General of the Federal and security agencies that they knew nothing about the operation.

He said the NBA also rejected the panel being set up by the AGF to investigate the matter because the AGF himself has a case to answer and he could not be a judge in his own case.

He, therefore, called on President Muhammadu Buhari, to set up an independent panel to unravel the actors behind the invasion of Justice Odili’s home.

“It behoves Mr President to step in immediately, to set up this panel of inquiry, which, at the minimum, will have a judicial officer and the NBA involved so that we can get to the bottom of this issue and ask: who gave that instruction?”

Akpata said the NBA would also do its own housekeeping, vowing that, “In the event that we find that any lawyer was involved in this unfortunate incident, that lawyer will be subjected to our disciplinary mechanisms and that lawyer will definitely face the music.”

The NBA President said, “We note that the Attorney General of the Federation has reportedly agreed to make himself available for investigation. This is consistent with the position of the National Executive Council of the NBA, to the effect that the Attorney General definitely has questions to answer. However, he cannot subject himself to a panel that he sets up. This is why the panel to be set up by the President is very necessary.

“If the Attorney General is found culpable, then as a lawyer, we will take him before the Legal Practitioners Disciplinary Committee and the Legal Practitioners Privileges Committee; because if indeed, he is found to have given the directives that led to the invasion of the home of the Justice of the Supreme Court, then he is not fit to hold the office he occupies presently and continue to be the recipient of the privileges the profession has accorded to him.”

Asked by a journalist if the NBA has the power to discipline the AGF, Akpata added, “There is a mechanism, and that is for us to bring him before the LDPC and what does the LPDC do? What is the ultimate sanction, amongst others? He can be stopped from practising law. What does the LPPC do, amongst others? The LPPC can strip him of the rank of Senior Advocate of Nigeria and also the Body of Benchers can reconsider his life membership of that body. So, without mincing words, those are the steps that the NBA can take.”

The NBA President said action was also being taken against the Abuja magistrate, Emmanuel Iyanna, who issued the search warrant leading to the invasion of Justice Odili’s home.

“Questions must be asked of the quality and sufficiency of the materials placed before His Worship before issuing the search warrant in the first place. The NBA National Executive Council believes that even on a cursory reading of the materials placed before His Worship, there is a prima facie evidence that the search warrant ought not to have been issued in the circumstance,” he said.