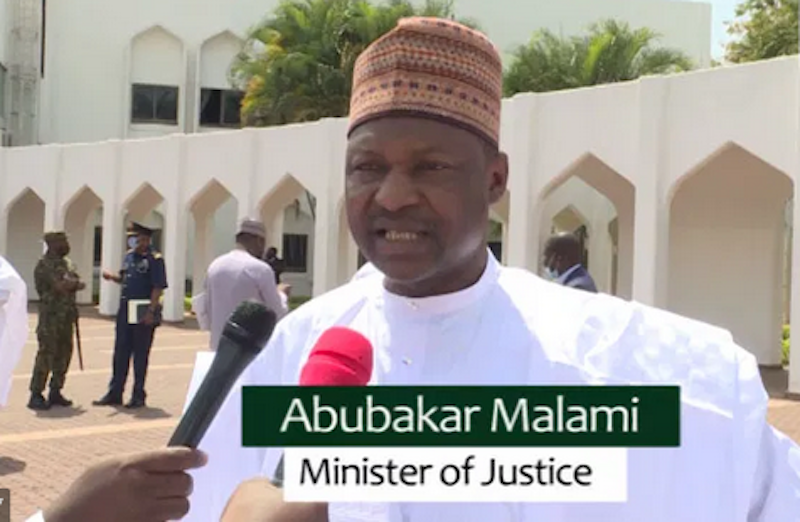 During the keynote address at a conference organized by the National Association of Judiciary Correspondents on Thursday in Abuja,  Attorney-General of the Federation and Minister of Justice, Abubakar Malami (SAN), said his tenure has not ended, so he won’t be resigning from office.

The AGF cleared the air about the reports that were going round that he had resigned from office and also urged media reporters to draw out facts from their findings before drawing a conclusion, even as he called for the prosecution of journalists used by mischievous politicians.

“It is high time that we enhance media literacy for Nigerians to appreciate fact-checking and verification of information.

“Many who relied on some unprofessional information disseminators will be taken aback that the Malami that was claimed to have resigned as Attorney General of the Federation and Minister of Justice was still seen in office discharging his functions including attending the Federal Executive Council meeting yesterday, granting interviews to journalists and still today declaring this conference open as the Attorney General of the Federation.

“There is naturally an end to everything. My tenure in office has not yet ended. I pray for a glorious end.”

Malami was the National Legal Adviser of the defunct Congress for Progressive Change.He was actively involved in the formation of the All Progressives Congress  in 2013 as the resource person to the Manifesto Drafting Sub-Committee of Inter Joint Party Merger Committees between the Congress for Progressive Change (CPC), Action Congress of Nigeria (ACN) and the All Nigeria Peoples Party (ANPP). In 2014, Abubakar contested for the governorship ticket of the All Progressives Congress in Kebbi State but stepped down during the party primaries in favour of Atiku Bugudu.