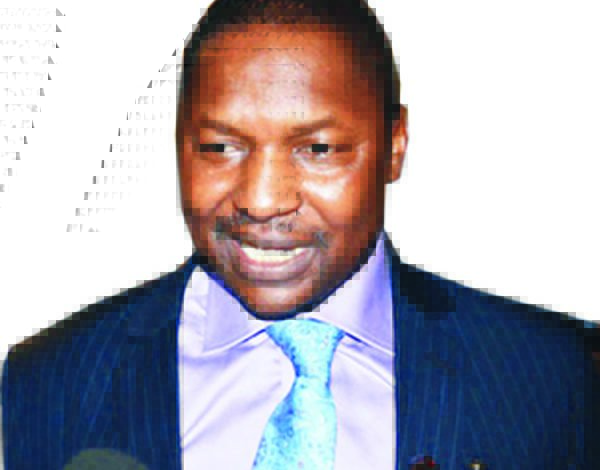 The Body of Benchers, responsible for recruiting Nigerian lawyers into the legal profession and sanctions them for unethical conduct, has honored the Attorney General of the Federation, Mr Abubakar Malami (SAN), with the rank of ‘Life Bencher’.

The honour came at a time that some lawyers were demanding that Malami be stripped of the SAN title.

A petition against Malami on Change.org, started on Sunday by an Abuja-based lawyer, Izu Aniagu, had garnered over 2,400 signatures as of Wednesday night.

The petition demanding that Malami be stripped of his SAN rank was predicated on his recent unilateral amendments to the Rules of Professional Conduct for Legal Practitioners 2007.

The AGF reportedly deleted the provisions of the RPC, which makes it mandatory for lawyers to purchase and affix the NBA stamp and seal on papers they are filing in court.

The removal of the requirement for the NBA stamp and seal by Malami was interpreted by some lawyers as a tactical way of weakening the NBA at a time when some group of northern lawyers were promoting a parallel association named the New Nigerian Bar Association.

Aniagu, who started the online petition against Malami, argued that the unilateral amendment to the RPC by him was a threat to the rule of law.

Aniagu said Malami ought to be stripped of the NBA rank for this latest action coupled with his previous other alleged wrongdoings, ranging from “disobedience to court orders, to his lacklustre prosecution, to his outright failure to prosecute, to allegations of corruption and bias against his person, to the usurpation of office, to shielding of suspects, to his general dereliction of duty.”

Meanwhile, a former Vice-President of the NBA, Mr Monday Ubani, has commenced a lawsuit against Malami over the RPC amendments.

In the suit filed before the Federal High Court in Lagos, Ubani sought, among others, a declaration that Malami “lacks the capacity, powers or vires to unilaterally make, amend and or alter the provisions of the Rules of Professional Conduct for legal practitioners, 2007, in his personal or official capacities, as the Attorney General of the Federation and or as President of the General Council of the Bar, without the input of other members of the General Council of the Bar, in a meeting duly convened and notices of the said meeting properly issued and served on the members of the General Bar Council.”

Ubani is praying the court to restrain Malami from giving effect to the controversial amendments.