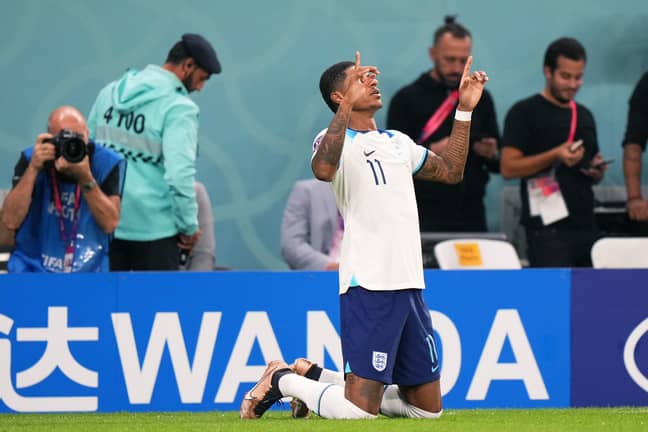 Marcus Rashford explained why he raised his hand in the air after his World Cup-clinching goal against Wales.

Rashford had not worn an England jersey prior to the competition since missing a penalty in the Euro 2020 championship game.

In October, the final call-up before the competition, he was selected for the Nations League team but had to withdraw due to injury.

The Manchester United player was called up as a result of his club’s strong start to the current season, and he has sustained that success for Gareth Southgate’s team.

Marcus Rashford came off the bench to score England’s fifth goal in a 6-2 drubbing of Iran, taking just a few seconds to do it.

The 25-year-old then made enough of an impression in England’s relatively bad performance against the USA as a substitute to earn a start against Wales in the championship game.

With two goals and a hand in the third as Southgate’s team defeated their neighbors 3-0 to eliminate them from the competition, Rashford undoubtedly showed that it was the right move.

Marcus Rashford explained the tragic story behind his celebration after the game, dedicating his goal to a friend who had passed away just a few days earlier.

“I lost one of my friends a couple of days ago. He had quite a long battle with cancer,” the England forward told reporters after the game.

“I’m pleased I scored for him, he was a big supporter and good friend of mine. He was someone who came into my life.”

The forward has had a rough few years, especially when it comes to the national team, with the missed penalty against Italy being the lowest point.

Prior to the Euros in 2021, he last started for Southgate against Romania in a pre-tournament friendly. He only participated in the competition as a substitute.

He made his competitive debut against Denmark in a Nations League game played in secret in 2020, during which both Harry Maguire and Reece James received red cards.

Since then, especially at Old Trafford, he has struggled with form and confidence loss, and last season he appeared to be a shell of his former self.

He has already scored eight goals for his club team and three more for his national team this season thanks to the signing of Erik ten Hag.

After scoring first, England quickly doubled their advantage over Robert Page’s team, who needed to win to advance.

After 17 minutes, they finally scored their third goal when Kalvin Phillips found Marcus Rashford, who overcame three challenges to smash low at Danny Ward, who fluffed the shot and let it in.

The United forward is presently tied with Enner Valencia, Cody Gakpo, and Kylian Mbappe for the tournament’s leading scorer.

Gavi Will Find It Difficult In EPL—Ex Manchester United Star