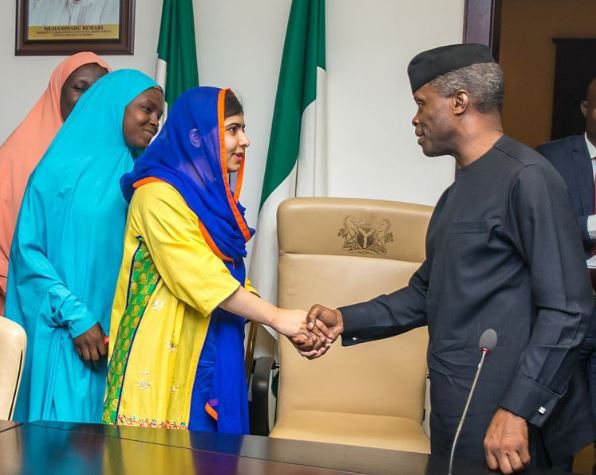 According to Punch, she met with the Acting President to discuss the implementation of the Child Rights Act in all states of the federation, after she met with the released Chibok girls kidnapped by Boko Haram.

It was a very good meeting. I had very good response. I highlighted a few issues. The first was to ask the government to declare a state of emergency in the nation’s education sector because the education of the Nigerian girls and boys is really important.

The Federal Government, state governments and local governments should all be united for this.

Secondly, the spending should be made public and thirdly, the Child Rights Act should be implemented in all states.

I am happy to hear positive responses from the ministers as well that they are ensuring that education is prioritized for every girl and in every boy and education in Nigeria is given priority.

Malala Yousafzai was accompanied by her father and other activists.

She also expressed her delight at the release of the Chibok girls. She said she is happy the girls are back with their families and continuing their education.

Malala had written an open letter to the parents of the Chibok girls back when they were still captives of the terrorist group.

Nigerian Pilot leads people to worship while on air | Watch!