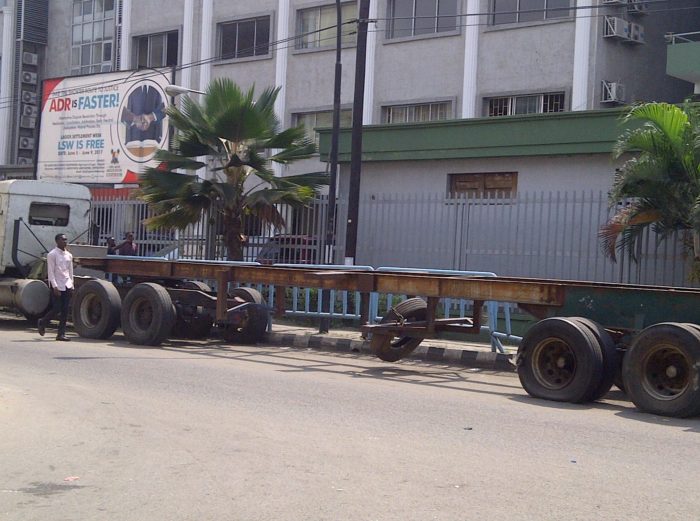 Concerned litigants who throng the Igbosere Magistrate Court daily to attend to their matters and motorists passing through the busy Igbosere Road, Lagos Island have appealed to Governor Akinwumi Ambode of Lagos State to as a matter of urgency direct those concerned to remove the abandoned truck at the Igbosere Magistrate premises to safe lives.

They said that the truck, apart from constituting nuisance and obstructing the free flow of traffic in the area, is also occupying a stretch of parking space for litigants and endangering the lives of motorists and road users as many motorists and tricycle riders had crashed into the truck at night and caused injuries to passengers.

Some of those who spoke with PM NEWS at the Court said that apart from the truck causing serious traffic on the busy Igbosere Road,its presence is denting the beauty of the Court.

They, therefore, appealed to Ambode to act fast and order for the remover of the truck from the court premises to avert injury and death.

According to Mr Jide Salau, a litigant, the abandoned truck at the Igbosere Magistrate Court premises, apart from being a dent to the Lagos State Judiciary, is also a security risk as it could serve as a hideout for criminal elements to attack Road users.

Mr John Omene, a motorist said “Governor Akinwumi Ambode has been doing a wonderful job at the the Igbosere Magistrate Court and Lagos State in general since he assumed office and he should complete the good job by removing the abandoned truck from the Court premises to save lives.”