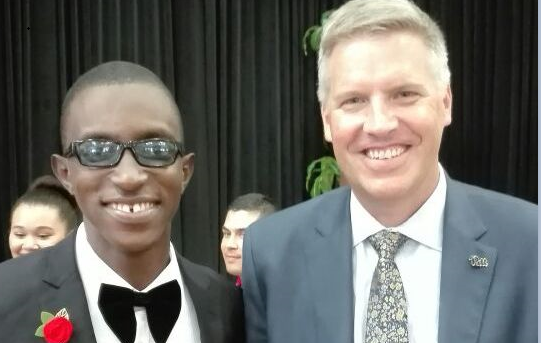 A 300-level student of Lagos State University (LASU), Pelumi Olugbenga, has been honoured as a Fellow, Hesselbein Global Academy of University of Pittsburgh, Pennsylvania, US.

LASU revealed in a statement on Wednesday that the fellowship was conferred on Olugbenga after a five-day summit on ‘Student Leadership and Civic Engagement’ organised by the US varsity.

The student had earlier been named one of the five Africans to participate in the 2017 Hesselbein global leadership summit.

To be selected as a Hesselbein international scholar, the students went through rigorous processes that included the submission of a curriculum vitae and personal essays on challenges and achievements as a student leader.

Also, individual thoughts on leadership approaches and policies that can bring changes and innovative ideas on global development issues, community service, among others were also considered.

The five-day summit ended with the presentation of awards on July, 25.

According to LASU, Olugbenga earned the honour upon the completion of his assignments and projects at the academy and was decorated with a medal by the University of Pittsburgh.

The award was presented by Patrick Gallagher, the vice-chancellor, University of Pittsburgh.

Oluwagbenga, while in the academy, worked with Rise Against Hunger, a non-governmental organisation (NGO) based in New York.

According to the statement, the group is saddled with packaging thousands of meals to feed over 10,000 less privileged children across the world.

“In carrying out his civic engagement, Olugbenga worked with four other Hesselbein Fellows from other countries at the American Red Cross, Western Pennsylvania.

“They presented ideas that would help the American Red Cross go viral and be more effective in its operations.”

Meanwhile, Olanrewaju Fagbohun, vice-chancellor of LASU, has congratulated Olugbenga and wished him all the best in his future endeavours.