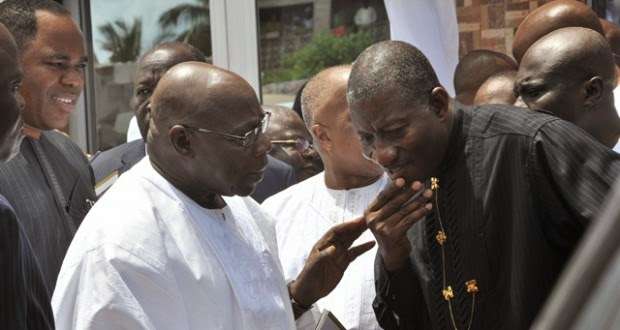 Nigeria’s Former President, Goodluck Jonathan has said the legacies of ex-President Olusegun Obasanjo have continued to endure many years after leaving office.

In a statement he signed, Jonathan said Obasanjo’s legacies “have continued to endure many years after you left office as President of the Federal Republic of Nigeria.

“I join your family and friends to celebrate you as you mark your birthday this year. You are an accomplished leader, with a sterling reputation in statesmanship and a peacemaker in Nigeria and across Africa.

“Your legacies in Nigeria and Africa have continued to endure many years after you left office as President of the Federal Republic of Nigeria.

“Your Excellency, you are a beacon of hope to many leaders and a source of inspiration to people from all walks of life.

“As you celebrate, on behalf of my family and the Goodluck Jonathan Foundation, I wish you more strength, good health and peace in all spheres of life. Happy Birthday, Your Excellency.”

On the other hand, former Lagos governor, Bola Ahmed Tinubu, in a congratulatory message by his Media Aide, Mr Tunde Rahman, on Saturday in Lagos, praised Obasanjo for his patriotism and commitment to the unity of the country.

The All Progressives Congress (APC) stalwart said that “the former president had remained strong, agile and committed to the greatness of our dear nation.”

He explained that although there had been instances where he had disagreed with Obasanjo on important substantive issues, the former president had made numerous useful contributions to the country.

“Our debates have been spirited, yet always professional and without personal animus.

“Through it all, I have come to respect his love for the country and legendary work ethics.

“President Obasanjo has worked tirelessly for Nigeria, Africa and indeed the black race and has earned his stripes as an important statesman on the world stage.

“Baba Obasanjo is bold and courageous and will continue to be so, for that is the essence of his character,” he said.

Tinubu prayed to God Almighty to keep Obasanjo for many more years and that God grants him good health and ceaseless energy to continue to be of service to the country he loves so dearly.

Most 2023 political aspirants should be in jail – Obasanjo