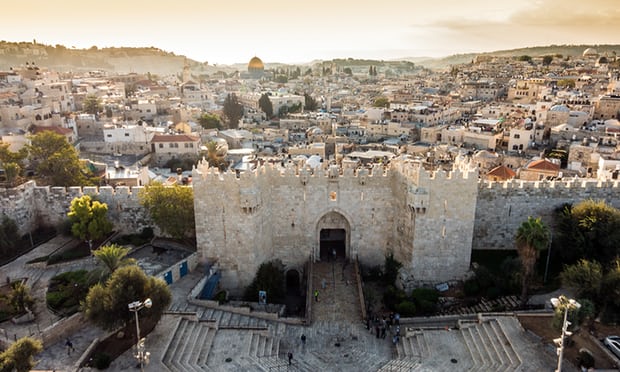 Israel has praised Guatemala’s president, Jimmy Morales, for following the lead of Donald Trump in announcing plans to move his country’s embassy from Tel Aviv to Jerusalem.

The decision by Guatemala, one of only eight countries to vote last week with the US in opposing a UN resolution condemning Trump’s move to recognise Jerusalem as Israel’s capital, is in stark contrast to the rest of the world, including all other 14 members of the UN security council, apart from the US, who opposed the move.

After speaking with the Israeli prime minister, Benjamin Netanyahu, Morales wrote to Guatemalans on his Facebook page that “one of the most important topics was the return of Guatemala’s embassy to Jerusalem” from Tel Aviv where it is current

“For this reason I am informing you that I have given instructions to the foreign ministry that it start the necessary respective coordination to make this happen,” Morales wrote.

The move is unlikely to have any significant impact, however, in international diplomacy or around Israel and the US’s isolation around the issue of Jerusalem’s status with all major states – including all of the US’s major European allies – against the move.

Guatemala has long had close security cooperation with Israel including being a purchaser of Israeli arms. Morales is an evangelical Christian whose election in 2015 was seen in Israel as marking the potential for closer relations.

“Wonderful news and true friendship!” he wrote on Twitter.

“Viva Guatemala! It takes courage for a superpower to stand up for justice and recognise Jerusalem as Israel’s eternal capital. But it takes even more – immense guts – for a small nation to do that,” Oren wrote on Twitter. “People of Guatemala, the people of Israel will never forget your support and bravery.”

“Guatemalans have shown they know very well that Jerusalem is the capital of Israel! I welcome their decision to bring their embassy to Jerusalem and thank them for their deep friendship,” added Israel’s president, Reuven Rivlin. “We look forward to welcoming you to Jerusalem!”

Guatemala became the first nation to pledge to move its mission to Jerusalem since Trump’s 6 December recognition of the city as Israel’s capital and decision to move the American embassy from Tel Aviv. Czech Republic has also since recognised West Jerusalem as Israel’s capital.

The announcement is scant compensation for Trump and for Israel who have been lobbying tirelessly behind the scenes to persuade other countries to line up behind their position with little apparent success so far.

Among other Latin American countries lobbied heavily around the time of Trump’s announcement, the Guardian understands, was Costa Rica, which has declined to follow suit.

While Czech Republic had briefly suggested it could follow Trump’s line, it quickly reversed its position, and by last week had contented itself with merely abstaining in a UN general assembly vote that overwhelming criticised Trump’s move.

Instead Trump and Israel have had to content themselves with the support of Togo, a handful of tiny Pacific nations and Honduras and Guatemala.

In all, 128 nations voted to maintain the international consensus that Jerusalem’s status can only be decided through peace negotiations between Israelis and Palestinians. Only eight countries stood with the US in voting no to the resolution held in the UN general assembly, among them Guatemala and Honduras. Both are reliant on US funding to improve security in their gang-ridden territories.

The two nations are, along with El Salvador, in what is known as the Northern Triangle of Central America. Violence, corruption and poverty have made them the main source of illegal migration to the US, which is giving them $750m (£560m) to provide better conditions at home.

Morales, like Trump, was a television personality with no real political experience before becoming president of Guatemala in 2016. On Friday, he foreshadowed the decision he was to make regarding Jerusalem, as he defended his government’s vote at the UN.

“Guatemala is historically pro-Israeli,” he told a news conference in Guatemala City. “In 70 years of relations, Israel has been our ally.

“We have a Christian way of thinking that, as well as the politics of it, has us believing that Israel is our ally and we must support it. Despite us only being nine in the world [in the UN vote], we have the total certainty and conviction that this is the right path.”

Morales’s position has become fragile in recent months because of allegations of corruption against him being investigated by a special UN-backed body working with Guatemalan prosecutors.

The US ambassador to the UN, Nikki Haley, had said her country would “take names” of the states opposing its position, and Trump threatened to cut funding to countries “that take our money and then vote against us”.

Several significant US allies abstained from the UN vote, among them Australia, Canada, Mexico and Poland. Others such as Britain, France, Germany and South Korea were in the majority of 128 nations denouncing any unilateral decision to view Jerusalem as Israel’s capital.

The eight countries on the US side of the vote were: Guatemala, Honduras, Israel, the Marshall Islands, Micronesia, Nauru, Palau and Togo.

Following the US decision on Jerusalem, the Palestinian president, Mahmoud Abbas, said he would “no longer accept” any peace plan proposed by the US, dealing a pre-emptive blow to a new initiative expected by Washington next year.

Trump did not set any timetable for moving the embassy, and neither did Morales

Trump upended decades of US policy with his announcement this month. Though he said he was merely recognising reality and not prejudging negotiations on the future borders of the city, Palestinians saw the move as siding with Israel on the most sensitive issue in the Israel-Palestinian conflict.

Israel claims all of Jerusalem as its capital, while the Palestinians claim the city’s eastern sector, which was captured by Israel in 1967 and is home to sensitive religious sites. Many governments have long said that the fate of Jerusalem must be resolved through negotiations.

Trump’s announcement has set off weeks of clashes between Palestinians and Israeli security forces that have left 12 Palestinians dead.