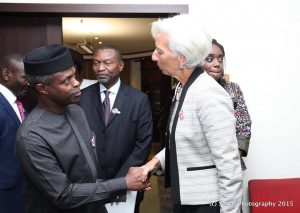 The International Monetary Fund (IMF) says non-performing loans across Nigerian banks have increased by more than double since 2015.

This was revealed by the IMF staff team, which visited Nigeria from July 20 to July 31, to discuss recent economic and financial developments, update macroeconomic projections, and review reform implementation.

The team, led by Amine Mati, senior resident representative and mission chief for Nigeria at the IMF, said MPLs have grown from six percent in 2015 to 15 percent in 2017.

“Preliminary data for the first half of the year indicate significant revenue shortfalls, with the interest-payments to revenue ratio remaining high (40 percent at end-June) and projected to increase further under current policies,” the statement by the team read.

“High domestic bond yields and tight liquidity continue to crowd out private sector credit. Given Nigeria’s low growth environment and the banking system’s exposure to the oil and gas sector, non-performing loans increased from 6 percent in 2015 to 15 percent in March 2017 (8 percent after excluding the four undercapitalized banks).”

The team also said “helped by favorable base effects, headline inflation decreased to 16.1 percent in June 2017, but remains high despite tight liquidity conditions”.

“Faced with these challenges, the government has started implementing a number of important measures. The Economic Recovery and Growth Plan (ERGP) is driving the diversification strategy, and security in the Niger Delta improved through strengthened engagement.

“The new Investor and Exporter FX window has provided impetus to portfolio inflows, helped increase reserves above $30 billion, and contributed to reducing the parallel market premium.

The IMF team also said “progress is also ongoing within the oil and energy sector through implementation of a new funding mechanism for cash calls”.

“However, near-term vulnerabilities and risks to economic recovery and macroeconomic and financial stability remain elevated. At 0.8 percent, growth in 2017 will not be sufficient to make a dent in reducing unemployment and poverty.

“Acting on an appropriate and coherent set of policies to enhance an economic recovery remains urgent. This includes implementing immediately specific priorities that will help achieve the goals of the ERGP.”

The Bretton Wood instititution asked for “a stronger push for front-loaded fiscal consolidation through a sustainable increase in non-oil revenues would be needed to create space for infrastructure spending, social protection, and private sector credit”.

“This should be simultaneously accompanied by a monetary policy that avoids direct financing of the government and is kept sufficiently tight, a unified and market-based exchange rate, and rapid implementation of structural reforms.

“Pursuing these policies would help reduce macroeconomic vulnerabilities and create an environment for a diversified private-sector led economy.”

Barclays Bank mandates Nigerians with less than £100,000 to close their accounts