How God will bring Ganduje, Sanusi together again - Shettima
Advertisement 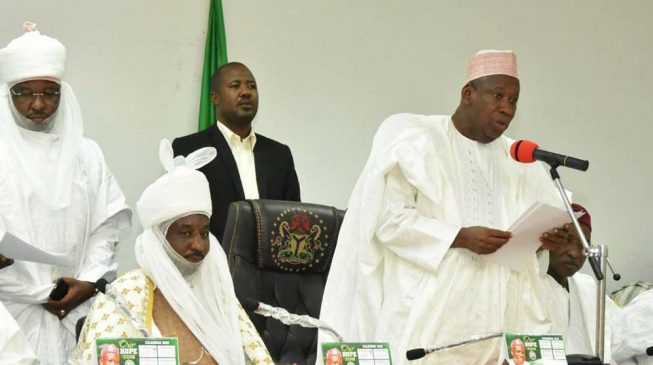 The governor of Borno state, Kashim Shettima has denied speaking in support of the creation of additional emirates in Kano state.

Speaking with reporters at the end of a meeting of the Northern Governors’ Forum  in Kaduna, Shettima said he has a special relationship with Abdullahi Ganduje, governor of the state, and Muhammadu Sanusi, emir of Kano, and cannot take sides in the controversy.

Ganduje had appointed four new emirs in the state, an action believed to be as a result of getting back at Sanusi who reportedly worked against the governor’s reelection.

Shettima, however, said he is indebted to the governor and the monarch, saying while Ganduje adopted 200 Borno orphans, Sanusi brought Aliko Dangote, Africa’s richest man, to his state for humanitarian assistance.

He said he could not speak ill of them.

“Fact is that I could never have supported the development in Kano emirate or spoken against the governor. Governor Ganduje and his highness, the emir of Kano have done some things that are eternally dear to the people of Borno, to me in particular,” he said.

“Governor Ganduje has adopted and granted lifetime scholarship from primary to university levels to 200 orphans from Borno state whose parents were killed by Boko Haram. These children are provided with accommodation, feeding and being given very good ‎education in Kano state under a special welfare programme that the governor approved. ‎

“On the other hand, the emir of Kano was our main link to Alhaji Aliko Dangote. In 2016, the emir was in Borno and on seeing the humanitarian situation, he spoke to Alhaji Aliko Dangote and Dangote has been to Borno state more than three times. He has given the highest individual and private sector support to our humanitarian course and I will never forget that the emir of Kano was the link.

“As CBN governor, the emir brought the CBN entrepreneurship development center to Borno state back in 2013 or so. He helped in raising global local and global awareness to our situation in Borno. I will never forget the empathy shown to us by the Emir of Kano as well as Governor Ganduje and this is why I play the role of a bridge builder.”

Shettima said northern governors are making background moves to ensure that the rift between the governor and monarch is settled.

“And then, we governors have one unwritten policy. We don’t openly interfere with the issues of one another. We only play background roles to lobby and appeal,” he said.

“The northern governors did play a role sometime back over the same Kano emirate and we are still working underground because I cannot dictate to Ganduje how he should run Kano but we can work underground as bridge builders.

“God willing the governor and the emir will come back together as one.”

How I overcame challenges in office – Jonathan