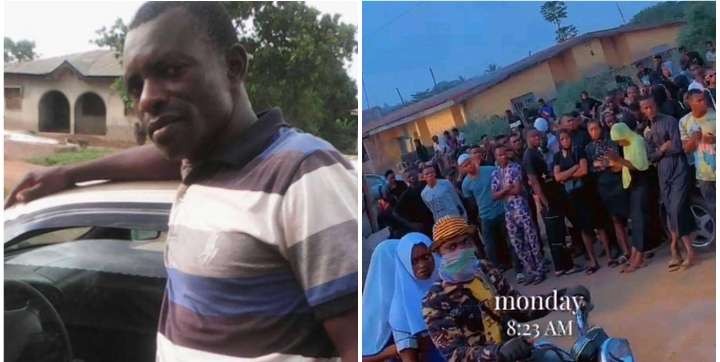 Ayatu Momoh, a Mass Communication lecturer who works with the Federal Polytechnic, Offa, has slumped and died.

He slumped at a community meeting on Sunday, November 28, 2021, in Offa, Offa Local Government Area of Kwara State. The deceased was the secretary of the Igala local community of Kogi State in Offa.

He was saying the closing prayers to bring the community meeting to an end when he slumped.

The institution’s Head of Media and Publicity, Olayinka Iroye, was yet to comment to the incident as of the time of filling this report.

Below is a tribute written about him.

I could not belief my eyes when I saw the update on someone’s status breaking the news of his death. I decided to put my ears to test since my eyes could not verify the fact. I put call across to a lecturer in the Department of Mass Communication to confirm, what I heard was exactly what I read. Simply put, Mr. Ayatu is dead.

To me, Death should not be a shock anymore. I had heard about death, I had slept in the same building with the dead. I read news about death in large figure on daily basis and I know that death is always on duty. But my series of experience about death was just a mirage; Mr. Ayatu’s death was more than shocking, it hits like a bullet.

On Friday, we observed jumat prayer together in school, on Sunday before his death, he attended a meeting, he wrote the minutes of the meeting as the secretary, he gave the closing prayer and called it day on the spot; he embarked on eternal journey just like that.

He chatted his project supervisees on Sunday morning talking about meeting them on Monday, that Monday meeting has been postponed till resurrection day. He is on his way to final home, the home we all belong, willingly or unwillingly.

Had Mr. Ayatu fought anyone before his death, such person will be labelled and held responsible, ‘Ijaodola’. Tell the one holding grudges to embrace peace. Everyone is ‘aniku lapo’ and no one is ‘kuti.’

His death could not only be described as painful exit but a big loss. Losing a very simple, easy going, approachable, calm, friendly lecturer like him would forever etch in our memories.

Death is a lesson for the living. Mr. Ayatu’s death has taught us another lesson that tomorrow is not guaranteed. No one could ever imagine Mr. Ayatu’s death in the next five, ten years. He was agile, active but God’s plan supersedes ours. God has staged his death as a surprise. He took him away without any notification. God is wonderful!

The legacy he left behind is worthy of emulation. He’s always ready to help, always ready to impart knowledge, always ready to listen to his students and he took life in its simplest form. Tell the one who holds life in high esteem to calm down. Death is real; life is vanity.

Good night to the amiable lecturer per excellence. May God be pleased with your soul.

Related Topics:Ayatu Momoh
Up Next