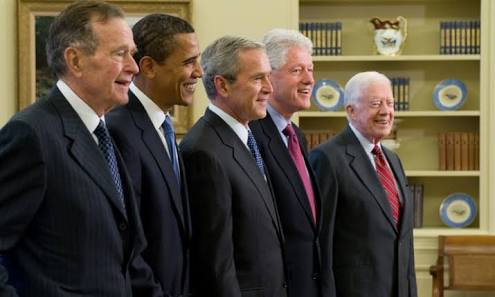 Five former presidents of the United States have teamed up in an Hurricane recovery effort on Thursday to raise money for victims of Hurricane Harvey in Texas, under a mantra “One America Appeal”.

The campaign is a rare unity in American politics given the party divide, though, former Presidents George Bush and Bill Clinton had teamed up to help Hurricane Katrina victims which struck New Orleans in 2005, and also a joint force was raised by Bush Jr and Clinton for victims of the 2010 Haiti earthquake during the Obama regime.

President Trump has however commended and endorsed the actions of his predecessors in a tweet in the early hours of Friday. He wrote, “We will confront ANY challenge, no matter how strong the winds or high the water. I’m proud to stand with Presidents for #OneAmericaAppeal.”

The campaign, jump started with a public service announcement which featured the five former presidents during the first N.F.L. game of the season on Thursday night, with former President George W Bush remarking that, “People are hurting down here”.

The fund-raising effort targets people people affected by Hurricane Harvey, which wrecked huge havoc and crippled economic activities in southeastern Texas – a state governed by President W Bush in the 1990s and which also harbored his father within those years.

The campaign will also expand to incorporate the victims of the latest strongest Atlantic Hurricane “Irma” currently ravaging the Caribbean and forecasted to strike South Florida over the weekend and subsequently move to Georgia.

Donations through the fund raising which can also be made online at oneamericaappeal.org, will go to a special restricted account created through the George H. W. Bush Presidential Library Foundation, and will be subsequently distributed to two charities, the “Houston Harvey Relief Fund” and the “Rebuild Texas Fund”.