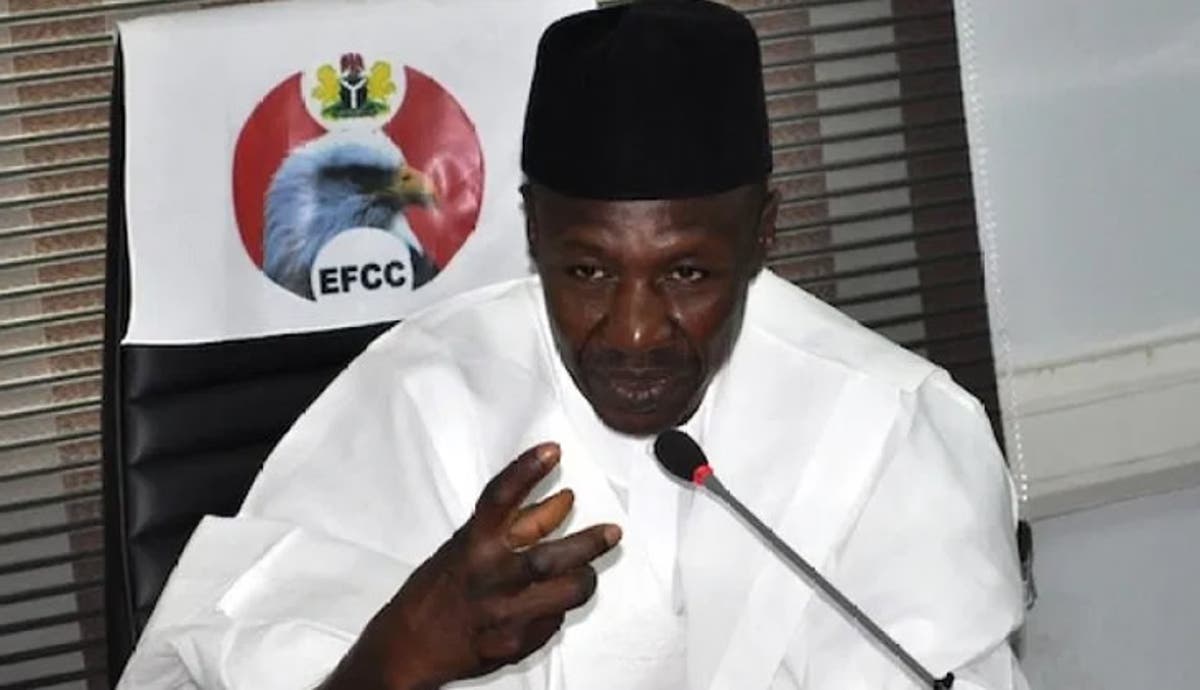 Challenges of the suspended and embattled acting Chairman of the Economic and Financial Crimes Commission, Ibrahim Magu have worsened as the presidential panel investigating corruption allegations against him shifted its focus to properties he allegedly acquired in Dubai, the United Arab Emirates.

The suspended EFCC boss, who has been in the police custody since his arrest on Monday, was interrogated for the third time on Wednesday.

Fresh allegations emerged against Magu as the panel continued its sitting just as he was again detained after Wednesday’s interrogation.

Magu was accosted by security agents in plain clothes in front of the old EFCC headquarters on Fomella Street, Wuse 2, Abuja, at noon on Monday and compelled to appear before the panel.

He has been in police custody at the Force Criminal Investigation Department, Garki, since Monday from where he has been appearing before the panel to respond to questions on the allegations raised against him by the Attorney-General and Minister of Justice, Abubakar Malami (SAN).

Like what happened on Monday and Tuesday when the panel quizzed Magu for several hours, journalists were again on Wednesday not allowed access to the Old Banquet Hall of the Presidential Villa, venue of the interrogation. Some State House reporters who attempted to enter the press gallery located inside the building were politely turned back.

Even those who attempted to park their vehicles in the car park of the facility were asked to make use of other parks within the Presidential Villa.

TopNaija gathered that the Justice Ayo Salami-led panel was interested in establishing if indeed Magu bought properties abroad, particularly in Dubai, where he was said to have travelled to several times on official and private visits. It was further learnt that the panel also was preoccupied with allegations that N39bn had been diverted from the recovered loot.

Sources said the panel would carry out forensics on documents recovered from Magu’s house as well as an analysis of his earnings and bank records. A source stated, “The panel is working to verify allegations that Magu has properties in Dubai and other parts of the world. It is also probing an allegation that funds were diverted from recovered loot.

“I don’t know how far the panel has gone in exploring these interesting angles, but real estate titles and bank records would leave a trail that cannot be hidden. The panel planned to subject documents recovered from Magu’s residence and office to forensic analysis.”

After being questioned for eight hours on Wednesday, Magu was taken back in police custody, where he spent Monday and Tuesday nights.

New allegations have continued to emerge in the course of investigation which had caused the investigation to linger. For instance, Magu was alleged to have sold off or mysteriously released about 157 oil tankers without following due process. The vehicles were alleged to have been seized by the Port Harcourt zonal office of the EFCC.

The money was said not to have been remitted to the government’s coffers while those released were said to have been done after bribes were given to senior EFCC officials loyal to Magu.

A report by the Auditor-General of the Federation last year also noted that about N13.96bn reported as salaries and wages in the consolidated financial statement of the EFCC were not in the anti-graft agency’s trial balance submitted for reconciliation.

Besides, the EFCC was listed as one of the agencies with “doubtful cash balance” of over N315m. These allegations are also being looked into. A top government official said, “Magu is not just the chairman but the chief accounting officer of the EFCC. So, every allegation regarding diversion or misplaced funds must be directed at him.

“There are allegations that about 157 oil tankers seized by the Port Harcourt disappeared. Some were sold while some were returned to the owners after massive bribes were given through operatives we believe to be Magu’s proxies.

“We are also working on some reports from the Office of the Auditor-General and the Federal Inland Revenue Service regarding some financial lapses in the EFCC. For some of the allegations, Magu was not able to explain while for some, he offered explanations.

“Whenever he gives explanations, we investigate and cross-check and based on the outcome of the investigation, more questions are asked.”

When asked if it was not against the law to hold Magu beyond 48 hours in line with the constitutional provision, the source said Magu was being held by the police and he remains a member of that organisation.

He said, “Magu is a senior policeman. The police are also represented on the panel in the person of DIG Ogbezi. Magu is being kept in police custody in line with police rules just like the way other senior officers are detained during a probe. This is not an illegal detention.”

Besides Salami other members of the presidential panel investigating Magu are a Deputy Inspector-General of Police, Mike Ogbizi representing the Nigeria Police Force; Hassan Abdullahi representing the Department of State Services and Douglas Ekwueme who is an official of the Nigerian Financial Intelligence Unit.

Others include Mallam Shamsudeen representing the Office of the Accountant-General of the Federation, Mohammed Abubakar from the Federal Ministry of Justice and Mr. Kazeem Atilebi representing Civil Society Organisations.