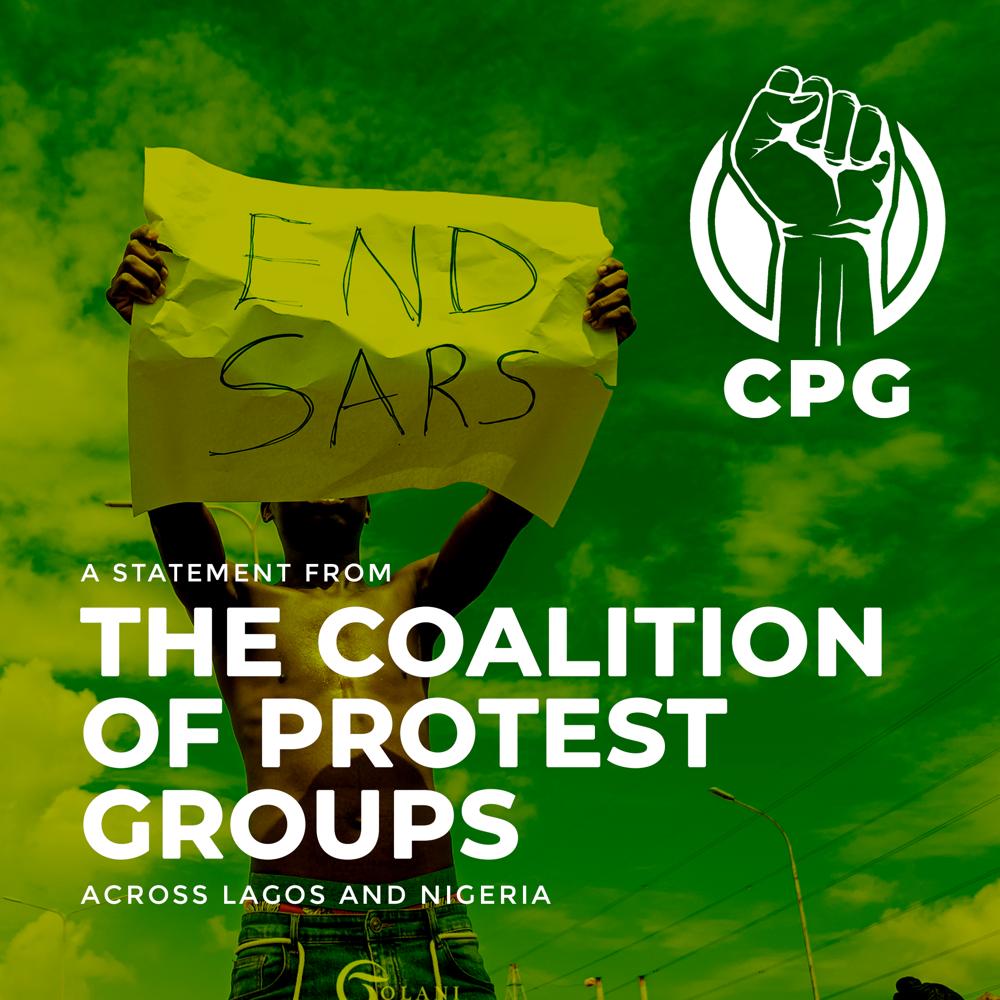 The Coalition of #EndSARS protest groups across Lagos and Nigeria has released a statement regarding deprioritize physical protests for now, and its objectives in the next couple of days which includes, the nomination of leaders to represent protesters, clean up, offline community engagement and more.

Read the statement below:

Following the nationwide address from President Muhammadu Buhari on Thursday, October 22, we are more resolved to press not just for justice but for a new and better Nigeria where all citizens are safe and can thrive.

Lagos State, where the hotbed of resistance began has been under state-wide curfew imposed by Governor Babajide Sanwo-Olu. Prior to that, Soldiers attacked peaceful protesters at the Lekki Toll Gate and unleashed carnage. We have watched with horror, the ensuing acts of violence, murder, looting, razing and vandalization of homes, businesses and organizations in Lagos State, and we will like to state emphatically that these are not protesters. We completely condemn any form of violence or looting.

For the sake of the wellbeing of our comrades and ordinary citizens being adversely affected by this, we will deprioritize the physical protests, for now. But, for the sake of those who died, before the protests, during the protests, and at the hands of Soldiers at the Lekki Toll Gate — people who the government has largely refused to acknowledge, THE STRUGGLE MUST CONTINUE.

Here are our objectives in the next few days:

During our protests, we made a conscious effort to clean up the venues and keep our environment safe for everyone. Following the condemnable vandalizations that took place since the curfews began, we are volunteering efforts towards the clean-up and rebuilding of the state.

We will continue to intensify online publicity and protest of the issues and demands made. We will be hosting conversations, sharing articles and amplifying voices of thought leaders in that direction.

We will continue grassroots mobilization and civic education of the masses, providing tools for education to enable them to understand the scale and scope of what is at stake.

We are putting a timeline together to track actions taken to meet our demands. This way, we know what has been done, what is being done, and what can be ticked off our list. This way, we know if and when the government defaults, and we can decide if a return to the streets is necessary.

We are building short, medium- and long-term strategies to sustain this momentum and keep this fire that has been ignited by the actions of young people across Nigeria burning. The strategies are pillared on and geared towards Education, Voter Registration, Political Consciousness and Representation for Young People in government.

We will create a structure to strategically consolidate demands, formalize the coalition, galvanize the continued online protest, develop standards for monitoring and evaluation, and continue the mobilization and education of the citizens.

The leaderless nature of this protest but consistent oneness in demands have been part of our unique strengths. As we move towards consolidation and negotiation, it is now pertinent we put forward a diverse group to represent the different coalitions; from celebrities to activists, legal minds to strategists, journalists to entrepreneurs, etc. We consulted far and wide, to come up with these names, and while this may not be exhaustive, it offers us an interim basis to begin the negotiation and consolidation.

The nominees will meet with different protest leaders/blocs across the country/states, and consolidate on a vehicle for continuous demands. They will also track actions of the Government, represent our demands and provide feedback to us regularly. They are:

Names of Nominees at the Federal level:

Names of Nominees at the State level: (Lagos)

Due to the decentralized nature of this movement across the country, we nominate a team with experience in leadership and diplomacy, to assist in advisory and other support. This team will be consulted from time to time within the process. The criteria are people with integrity, people who have a vast experience in national issues, and who have a track record of being pro-young people.

Nominees for Advisory Board

All nominations are provisional. If there are people you think should be on the list, people who have been critical in the success of these protests and can work towards the actualization of our demands, and the ultimate mission — a better government/future for Nigeria, please nominate.

In conclusion, these protests have never been politically motivated. It is not about ethnicity or tribalism. The young people across the country are demanding justice, good governance, accountability and reforms. These protests have no sponsor nor agenda other than what we have stated repeatedly; better governance, accountability and an end to brutality.

To everyone who has lost someone or something, we stand in solidarity with you.

To all our heroes that died before and during these struggles, we say Rest in Power! Your deaths will not be in vain.

It is NOT finished!

On behalf of the Coalition.

Meanwhile, a group of concerned Nigerians who described themselves as non-partisan actors who believe in the union of Nigerians have called for urgent steps to be taken to prevent exacerbating ethnic and religious divides, anarchy, and the chances of a potential war between security agencies and the Nigerian youth.

In the statement seen by BellaNaija, the group condemned “the developments of the last weeks which culminated in a deadly attack on peaceful protestors, which from available evidence appears to be by agents of our government on 20th October 2020 present one of the most serious crisis in our nation’s history”.

No Nation can survive a war between its security agencies and its youth, and it is to avert this prospect that we make this intervention and recommend the following urgent action.

Having carefully observed the events that gripped Nigeria in the past days and weeks due to the recent protests by Nigerians across the country and the world, against bad governance, widespread police brutality, and corruption, the group recommended four urgent steps:

The group called on President Muhammadu Buhari to take immediate urgent steps to address the widening trust deficit between the Government and the President on the one hand, and the Nigerian youth and its people on the other. To move forward, the President must take decisive action to close the trust deficit by:

Identifying and arresting immediately the persons that instructed for soldiers to shoot protesting youth at the Lekki Toll Gate on 20th October 2020.

Institute an urgent independent inquiry on the events at Lekki toll gate leading to the use of live ammunition on the protestors and the apparent use of sponsored thugs or hoodlums by security operatives to infiltrate and break the peaceful protests.

Take immediate remedial action as spelt out in the youth Charter of Demands (which they term 5For5 Demands).

Address the Nation with a concrete plan of implementation of the modalities and timelines for police reform.

Respond positively to the consensus opinion that the heads of the security agencies have performed poorly and should be relieved of office.

Announce urgent steps to address perennial insecurity and killings in the country particularly in the North-East and North-West.

Finally, develop a clear work plan for the implementation of the governance reform programmes for which well-meaning Nigerians have been demanding

We commend our youth who have been courageous and patriotic in their demands for the protection of their rights and for a better Nigeria. We urge that all Nigerians support these demands which have been without any ethnic or religious coloration.

We urge the protestors to remain law-abiding and patriotic and not to engage in any intimidation or harassment of ordinary citizens or engage in any form of violence. We appeal to parties and stakeholders to work for the speedy resolution of the crisis.

On avoidance of violent demonstration

We strongly condemn the wanton destruction of properties, killings and maiming of innocent citizens and ethnicization by rioters and hoodlums trying to ignite a religious or ethnic conflict and call on ALL Nigerians to remain calm and avoid retaliation or taking the law into their hands.

According to the statement, these aforementioned steps, after its urgent execution and careful observation, will “halt our descent into a further breakdown of law and order”.

You can read the full statement here:

Related Topics:#EndSARS protest
Up Next