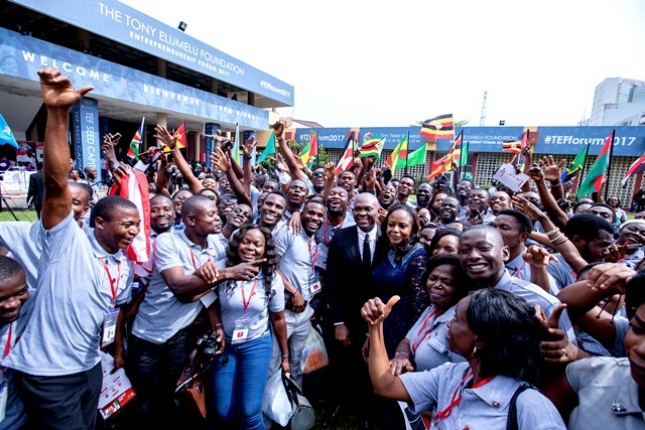 The Forum hosted more than 1,300 participants from 54 African countries. The most diverse and inclusive gathering of African entrepreneurs on the continent, the Forum continued its strong tradition of showcasing innovation across sectors, including Agriculture, Technology, Healthcare, Fashion and Energy/Power Generation.

Launched in 2015, the Forum was born out of the Foundation’s $100 million commitment to identify, train, mentor and fund 10,000 African entrepreneurs, over a decade, through the TEF Entrepreneurship Programme.

During a powerful keynote address, Tony O. Elumelu, CON, the philanthropist and Founder who is also the Chairman of the United Bank for Africa, spoke of his belief, that a vibrant African-led private sector is the key to unlocking Africa’s economic and social potential.

“Africa’s development, which must be private-sector led and entrepreneurially driven, will have at its heart, young African innovators and their transformative ideas.  Only they will create the millions of jobs Africa needs. The Forum has brought together Africa’s most important developmental force, her young entrepreneurs who will become catalysts for Africa’s economic liberation.

We have united the African entrepreneurship ecosystem, putting the entrepreneurs at centre stage. I want to thank those heads of government and other key policymakers, who have supported our firm belief that the private sector is the engine for growth and the private sector players, who are models of our philosophy of Africapitalism – the idea that business will drive change and that change must deliver economic and social wealth” he explained.

The two-day event, which involved plenary panels and masterclasses, provided the Tony Elumelu Entrepreneurs with a platform to network and connect with business leaders, policymakers and investors.

Focusing on the Forum’s theme of training and mentoring, speakers discussed topics that educated, empowered and inspired the entrepreneurs, addressing the key stages needed to successfully launch a business.

“The private sector working with the public sector can achieve so much by way of development. African governments should move beyond rhetorics and implement their ideas,” Oba Otudeko enthused.

Addressing the 3rd cohort of TEF entrepreneurs the Vice President of Nigeria, Professor Yemi Osinbajo said: “This generation of young people will do the exceptional. You are the reason Africa will work. The length and breadth of display of talent have shown that there is indeed hope”.

The Forum also witnessed multiple partnerships between United Nations Development Programme (UNDP) and the Foundation, and between French bilateral development bank, Agence Française De Développement (AFD) and TEF. Commending both agencies for their commitment to promoting youth entrepreneurship in Africa, Elumelu called on other individuals and developmental institutions to partner with the Foundation and expand the scale of its impact. “We call on friends of Africa to partner with the Foundation, to scale our impact beyond the 1,000 entrepreneurs a year. Real opportunity exists to tap into Africa’s potential and our entrepreneurs offer a gateway to participating in both economic success and creating social wealth”.

TEF partners including Microsoft, Sage One and Greentec also held training workshops and side events aimed at approaches to strategically scale up business. The United Bank for Africa (UBA) has proudly supported the forum.

Economist and entrepreneur, Tony Elumelu has said the time has come for leaders across Africa to implement a new development model that would help eradicate poverty in the continent.

He also noted that it was fundamental to help the youth see themselves as the change Africa was looking for and encourage them to lead the campaign against poverty in the continent.

This and other issues of development formed the crux of the two-day forum organised by the Tony Elumelu Foundation in Lagos south-west Nigeria.

“Our youths need jobs, plenty jobs, economic hope. There is so much uncertainty about the future.

“In Africa, we have tried different models to deal with these issues of poverty eradication, job creation and creating economic hope for our people – in fact, we know that we have not made much progress and in some areas we can even say that we have regressed,” Elumelu stressed.

Also according to him, aid inflow into Africa in the past 10 years is a whopping half a trillion dollars, yet the basic human development index has not significantly changed.

He, therefore, stated that the new development model which he referred to as ‘Africapitalism’ was of utmost necessity.

According to him, the present generation of young Africans represented hope for the continent.

“I’ve always known that this group of individuals, this generation of young people will do the exceptional. Earlier this month I spoke at the Financial Times Africa Summit on the theme what makes Africa work – here in this room are seated the answer to that question.

“Across Agriculture, ICT, hospitality, fashion, energy, manufacturing and many other fields, the breadth and depth of talent and innovation on display in the current and previous Tony Elumelu entrepreneurship cohorts have shown that there is indeed hope,” the Vice President said.

NYSC unveils timetable for 2017 Batch B