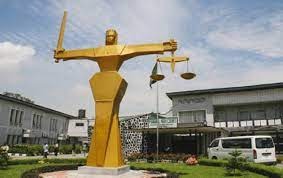 A 20-year-old man has been remanded by the court on two counts, one of which is of raping a nine-year-old in Katsina State.

The suspect, identified as Auwalu Lado, was remanded at a Katsina Correctional Centre over the alleged rape and escape from police custody.

The rape suspect will be held at the Correctional Centre until July 28, 2022, when his case will be heard by Senior Magistrate Fadile Dikko, who ordered his remand.

According to the police, Lado was arrested for allegedly raping the nine-year-old victim on May 25, 2022.

The police prosecutor, Inspector Lawal Bello, told the Senior Magistrate Court, where Lado was arraigned on Tuesday, July 5, that on the said day, the accused allegedly ambushed a nine-year-old girl along a bush path and allegedly forcefully had carnal knowledge of her.

The police prosecutor also revealed that Lado escaped from the State Criminal Investigation and Intelligence Department on June 3, 2022, while the police were recording his statement.

The police prosecutor told the court that the investigation into the two charges was still ongoing, which prompted him to request a new date for Lado’s case to be heard before the magistrate.

The Presiding Magistrate granted the request and adjourned the case till July 28, 2022, for mention.

She directed that Lado be remanded at the Correctional Centre till then.