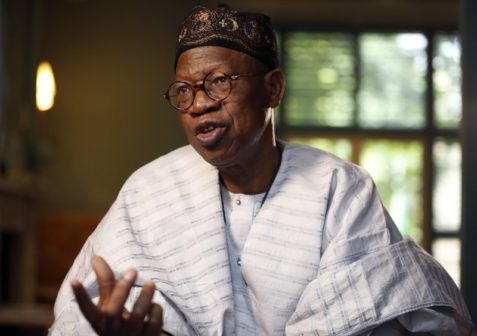 Minister of Information and Culture, Alhaji Lai Mohammed says the Calabar Carnival is not just a street party but a globally recognised event that celebrates culture, tradition, creativity and intelligence.

The Minister stated this on Saturday in Calabar when he inspected bands, costume making centres, rehearsal sessions for the 2017 Calabar Carnival.

The Minister who was in Calabar to declare open the dry run of the 2017 carnival, said that the perception of the event, in certain quarters, as a street party that encourages negative impact on youths was misconceived.

“The issue is about concept and perception because traditionally, we all want our children to be lawyers, doctors and engineers and we look at those in creative industry as being wayward.

“But that is years ago because today, the most successful people in the world today are those in the creative industry.

“Brick and mortar is no longer the way to make billions

“Bill Gate did not make his billions through building property but through the creative industry and Innovative technology,” he said

The Minister urged critics of the carnival to look at the big picture of the event in terms of local products exhibitions, creative ingenuity, employment generation and creating new economy.

Mohammed said that the Calabar carnival could compete with any big carnival in any part of the world and it is helping in creating jobs not just for the locals but also people from outside the country.

He said from his inspections of what was going behind the scene of the carnival, it has the underlining factors that could positively impact the economy.

He said the various competing bands participating in the carnival have their themes ranging from promotion of local contents, effects of climate change as well as topical local and national events.

“The freedom Band for instance is using performances to encourage Nigerians to produce what they consume and grow what they eat.

“Every material used is locally sourced and their creativity is also unique,” he said.

The Minister said that the Miss Africa Pageant competition which formed part of the carnival would place Calabar on global and continental attention.

Mohammed who had interactions with the 25 contestants for Pageant from various African countries said that the contest would be a display of beauty and brains.

Speaking in the same vein, Senator Florence Ita-Giwa who runs one of the competing bands for the carnival, Seagull Band, said the event is beyond street party because it celebrates intelligence and hard work.

Ita-Giwa who said her band won all the competition categories in the 2016 event, said she had put a lot of efforts in the past months to ensure outstanding outing in the 2017 edition.

She said many youths had been engaged by various bands in costume makings, performances and the local economy had been positively affected.

The Cross River Commissioner for Information and Orientation, Mrs Rosemary Achibong and the Chairman of the Calabar Carnival Board, Mr Gab Onoh, who both conducted the Minister on the inspection, thanked him for the visit.

Related Topics:CALABER CARNIVAL
Up Next