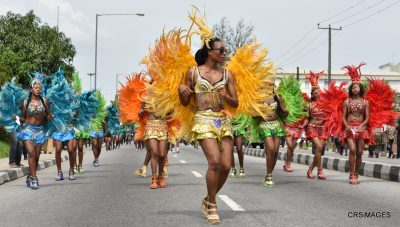 No fewer than 26 states will be participating in the 2017 Calabar carnival, scheduled to begin on Tuesday, Mr Gabe Onah, Chairman of the Carnival Commission has said.

Onah who disclosed this on Sunday in Calabar during the ‘Technical Recce’ inspection of the carnival routes and the special booths, also said a 30-man horse crew from the Estu Nupe, will participate in the carnival.

According to him, the participating states and local governments will showcase their rich cultural content and what they have to offer to the world.

“The 2017 cultural carnival will feature 26 states and all the 18 local government areas in Cross River. The essence is to allow the people showcase their rich cultural content to the world.

“Culture itself is dynamic, and what we have done over the years through training is to develop art and craft and taking them to the next level.

“We are satisfied with the Technical Team, the Very Important Persons booth at target by Mary Slessor is 80 percent ready and the booth at the High Quality by Marian Road is as good as ready too.

“Worthy of note also is the road rehabilitation programme for smooth dancing and movement of the tourists’’, he said.

He further said that the content of Calabar carnival had remained cultural, adding that the 2017 theme `Migration’ was global and unique.

The Chairman said that the carnival had provided a unique job opportunity for unemployed youths to be gainfully engaged in the production of arts and crafts and other fabric used in the carnival.

He said that no fewer than two million tourists from Nigeria and abroad are expected in the state to witness the “largest street carnival” in Africa.

He assured all those visiting the state for the carnival of adequate security had been put in place to ensure a hitch-free carnival celebration.

Related Topics:CALABER CARNIVAL
Up Next