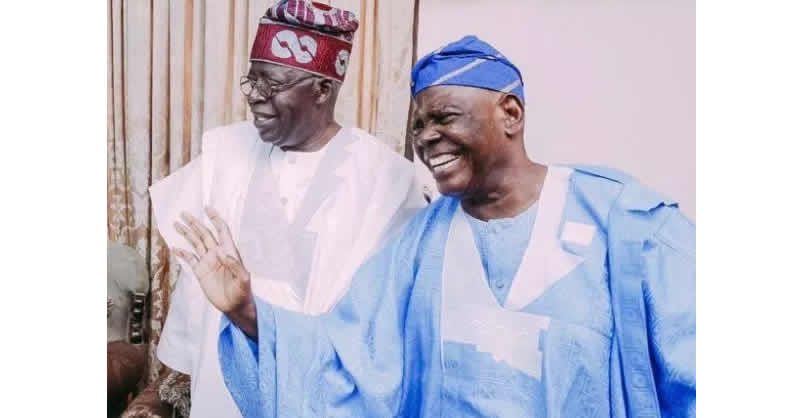 The debut interim Chairman of the All Progressives Congress, Bisi Akande has declared his support for Bola Ahmed Tinubu‘s intention to run for the presidency in 2023.

Bisi Akande announced the decision when members of the Southwest Agenda for Asiwaju Bola Ahmed Tinubu(SWAGA) met with the elder statesman in his home at Ila, Osun State.

The SWAGA team went to felicitate with Bisi Akande on his 82nd birthday but during the visit, they brainstormed with him on the state of the nation, particularly the push for presidential zoning to the region.

With Adeyeye were coordinators of the group from the six Southwest states of Ekiti, Ondo, Oyo, Ogun, Osun and Lagos, and other party chieftains.

Adeyeye, who explained the vision of the group to the party elder, said the nation will benefit immensely from Tinubu, if he succeeds President Muhammadu Buhari at the expiration of his second term.

However, Bisi Akande commended the efforts of the group and their selflessness in tasking themselves to mobilize and travel round the zone in pursuit of the patriotic cause.

He prayed for the delegation and assured the members of his total commitment to their cause.

The former Osun State governor pledged to support the group’s efforts by visiting prominent Yoruba elders to explain its mission to them.

He also promised to assist them to propagate the desirability, suitability, and viability of Tinubu’s candidature in the 2023 presidential race. Akande reiterated his support for zoning and rotational principle, saying that power should shift to Southwest in 2023.

Chief Bola Ahmed Adekunle Tinubu had previously served as the Governor of Lagos State from 1999 to 2007.