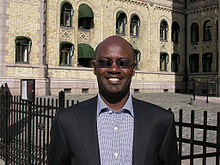 Andrew Mwenda (born 1972, is a Ugandan  journalist and the founder and owner of The independent , a current affairs Newsmagazine . He was previously the political editor of The Daily Monitor, a Ugandan daily newspaper, and was the presenter of Andrew Mwenda Live on KFM Radio in Kampala, Uganda’s capital cit

He attended Nyakasura School  and Mbarara High school , both in the Western Region  of Uganda, before attending Busoga College Mwiri in the Eastern Region.

In 2005, he was among sixteen senior journalists invited by the British government to discuss with Prime Minister Tony Blair the forthcoming report of the Commission for Africa.                        In the video below, he shares Aid For Africa? No Thanks. Watch

Related Topics:economywealth creation
Up Next