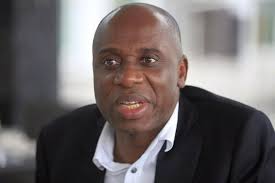 Dame Judith Obiajulu Amaechi ​has described her husband and Minister of Transportation, Rotimi Amaechi, as a blunt person.

​The former Rivers state ​First Lady said Amaechi is a man who doesn’t know how to be diplomatic.

In a chat with Vanguard, she also spoke on her husband’s political battles over the years.

​”​I believe that if you are someone who has the passion to do good, you will face a lot of challenges. ​There​ are so many down moments but how you manage them and how you are able to overcome them is left for God.

​”My​ heart reaches out to all the men who who have stood firm, all the women who have spoken out, who have had sleepless nights, all those who made the authority of Rivers State government the way it is, I say a big thank you to them for standing by my husband, especially in the darkest days; God will reward them.​”​

​On her husband’s personality, Judith said: “​I just see him as someone who isn’t what people expect. It is difficult to be the kind of person he is. He is just blunt, he tells you the truth; he is very straightforward and tells you exactly like it is. He doesn’t know how to be diplomatic.

​”​I can give you a clear example of myself when we first got married. He used to get me very upset in the house and I would brood over it, but by the time he came back home, he would have totally forgotten about it.

​”​Based on this, it did not take me long to adjust, as I realised that people could walk in, see me brooding while he was his ever cheerful self and label me a bad person. He is a strong patron of tough love, but after his message has been passed, he is quick to mend fences.​”​