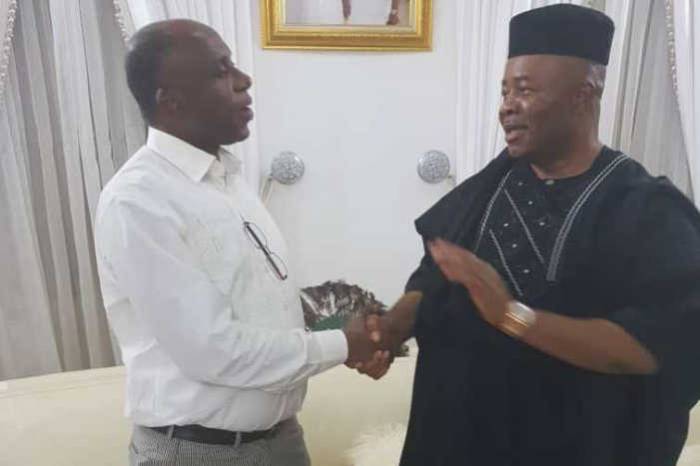 Nigeria’s Minister of Transportation, Rotimi Amaechi has met with former Senate Minority Leader and chieftain of the All Progressives Congress, APC, Godswill Akpabio, TOPNAIJA.NG can confirm.

The meeting which took place at the private residence of a chieftain of the party, Nasiru Danu in Abuja, on Sunday, was aimed at strengthening APC and settling differences that existed between the Minister and Akpabio, both former governors of Rivers and Akwa Ibom states respectively.

A statement by the spokesperson of APC 2019 presidential campaign council, Festus Keyamo, stated that the parley also centred around the performance of the party in the South-South zone during the just-concluded general elections.

According to Keyamo, both chiefs of the party promised to close ranks and work in unison for the overall interest of the party in the country.

The statement forwarded to newsmen reads: “Sunday, April 14, 2019, marked a new chapter of cooperation within the APC family as two frontline leaders of APC from the South-South region, the Rt. Hon. Rotimi Chibuike Amaechi and the former Governor of Akwa Ibom State and former minority leader of the Senate, Senator Godswill Akpabio, met each other to iron out their perceived political differences.

“The meeting, which was at the instance of Senator Godwill Akpabio, was brokered by two chieftains of the Party, Alhaji Nasiru Danu, (the Dan Amarna of Dutse) and Mr. Festus Keyamo, SAN. Alhaji Danu, was one of the Directors of Logistics of the APC Presidential Campaign Council and a long-time ally of President Muhammadu Buhari while Mr. Keyamo was the Director of Strategic Communications of the APC Presidential Campaign Council. He is also a Chieftain of the party from the South-South region.

“The meeting which took place at the private residence of Alhaji Nasiru Danu in the Asokoro region of Abuja lasted several hours where the leaders frankly and honestly talked about their various disagreements from their days as Governors in PDP and in the then Nigerian Governors’ Forum.

“They also discussed and analysed the performance of the party in the South-South region in the just-concluded election and identified areas where things went wrong and how to improve those areas in future.

“At the end, both leaders agreed to close ranks and work in unison for the overall interest of the party in the country. They promised to put behind them all previous perceived misgivings between them and to give a positive direction to the teeming supporters of the party across the country.

“The two witnesses at the meeting were Alhaji Nasiru Danu and Mr. Festus Keyamo, SAN.”

Pastor, 4 others killed in church attack in Burkina Faso