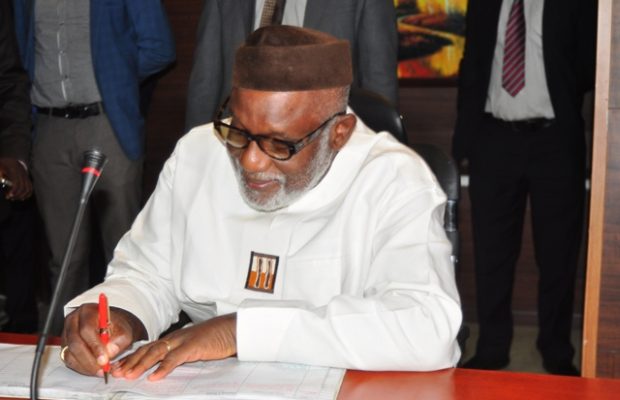 The governor of Ondo State, Rotimi Akeredolu has appointed Oluwatoyin Akeredolu as the new Acting Chief Judge of the state.

The appointment came after several months of legal tussle seeking the removal of Justice Temitayo Osoba from the position.

Osoba took over as acting chief judge shortly before the assumption of office by governor Rotimi Akeredolu in February.

An Akure-based lawyer, Femi Emodamori, had instituted a suit at the state High Court, querying the eligibility of Mrs. Osoba.

He also petitioned the National Judicial Council, NJC, and later called for her removal after the three months period of her tenure as Acting CJ expired without any pronounced renewal before the expiration date of the tenure.

Despite being dragged to court over the eligibility of Justice Osoba, Mr. Akeredolu was reluctant to make any change until recently when the NJC gave a directive for the dissolution of the state judicial commission and an appointment of an acting chief judge as stipulated by the relevant laws.

Announcing the new appointment on Saturday, a statement from the governor’s office, signed by his press officer, Adeyanju Kola, said Mrs. Akeredolu’s appointment as the Chief Judge of Ondo State took effect from Saturday, July 22, 2017.

“This, according to the letter of appointment signed by the Governor of Ondo State, is in pursuant of section 271(15)of the 1999 constitution as amended,” the statement read.

“Also according to the letter, the appointment is based on the recommendation of the Chief Justice of Nigeria and Chairman of National Judicial Council,” it added.

Until her appointment, Justice Akeredolu was the head of criminal division in Ondo State High Court.

The statement also added that she would be sworn in on Monday July 24, 2017.