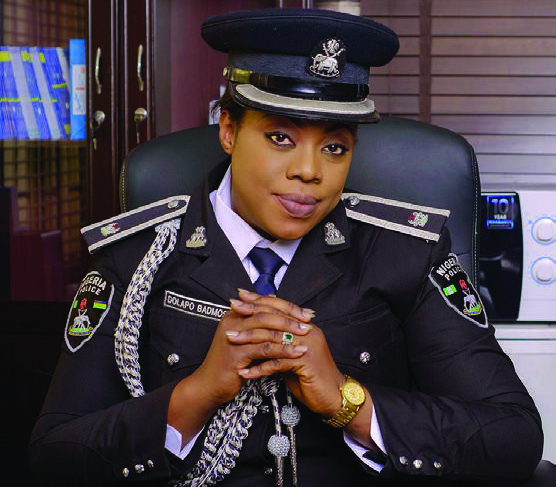 Congratulations are in order, as Dolapo Opeyemi Badmos, 40, the Police Public Relations Officer, PPRO, of Lagos State Command, announces she will be tying the knot with her sweetheart tomorrow, December 1st.

The vibrant PPRO announced the good news on her official Instagram page and also released her pre-wedding photo.

Dolapo and her hubby-to-be, with the Makindes

In an interview with The Point last year, the stunning fair-skinned female police officer, a graduate of accounting, recalled that she decided to join the police force, having found that 25 per cent of women in Nigeria had gone through ordeals bordering on domestic violence, trafficking, rape, homicides and other abuses.

Badmus, who views domestic violence as a violation of fundamental human rights, which the Nigerian Constitution abhors, says,

”There are still several unreported cases bordering on domestic violence that involved women and children. I was touched by the avalanche of reports bordering on abuse of women in general.

I thought within me that there must be a way out. It was as a result of a painstaking effort to reduce the menace of those violations that I decided to enlist into the Nigeria Police Force, which I see as an organisation that will afford me the opportunity to realise my dreams, since I have passion for the uniform job.”

The police image-maker adds that her ambition to be an officer came to reality on August 15, 2002, when she was enlisted as an Assistant Superintendent of Police.

”I was highly elated, having passed all the examinations that saw me becoming a Cadet Assistant Superintendent of Police.

What immediately came to my mind was that, with me and others that might have shared similar dreams of reducing the abuse, the menace would be reduced to the barest minimum,” she notes.

”My area of calling, as far as policing is concerned, has to do with the issue of domestic and sexual violence offences against women and children in this country.

Very importantly, I have taken this upon myself as a special duty, since my foray into the police work.

My affinity to this special call is borne out of the fact that almost every Nigerian woman faces this issue, and there is the need for a fight against it.”

Congratulations to the star cop!

NB: It’s NEVER to late to be, do or have the life of your dreams. Never.

How My 9-Year Marriage to Beyoncé Survived Infidelity – Jay-Z