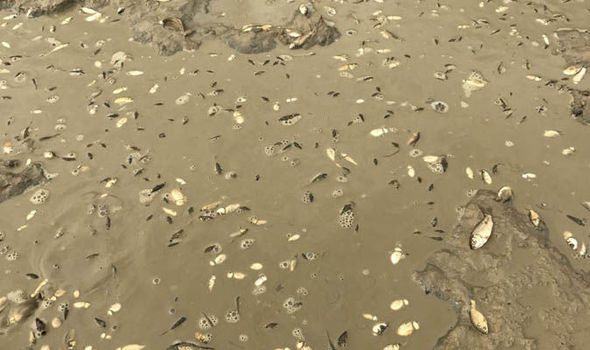 Animal collection officer Joe White described how he fought to save about 300 gold fish, though some were already dead.

Joe White was called by shocked walkers who first saw the fishes, as the warm weather dried the pond.

He said: “It’s been so hot and dry recently that, unfortunately, this small pond quickly dried up and left these fish to die a slow and painful death.
“I suspect a number of goldfish were dumped in this pond when someone decided they no longer wanted to keep them.
“Left to breed in a large pond the numbers have quickly spiralled out of control and over-populated a small amount of water.

“Thankfully, someone spotted them in the nick of time and we were able to save most of them.
Using a large container of water, White gathered the desperate fish and took them to the nearby South Essex Wildlife Hospital. Many were on the brink of death.

White added: “When they were moved into freshwater they were coughing up lumps of mud.
“It was a really awful sight to see the fish flapping around and struggling in the mud, they were effectively suffocating in front of my eyes.

Dumping goldfish in waterways or ponds is an offence under the Wildlife and Countryside Act 1981 as they are a non-native species.

Related Topics:gold fishpond
Up Next