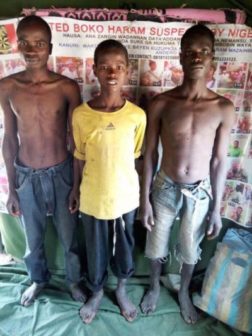 Troops of Operation Lafiya Dole have killed several Boko Haram members and captured 167 others during an intensified offensive on the terrorists’ enclaves in the Islands around the Lake Chad region.

According to him, the ongoing operation commenced about two weeks ago with coordinated air and artillery bombardments on Boko Haram enclaves while ground troops moved in to clear the areas.

Colonel Nwachukwu said the gallant troops also rescued and profiled 67 women and 173 children who revealed during profiling exercise that they are family members of insurgents who fled as a result of the offensive.

He said arrangement was ongoing to hand them over to authorities of Internally Displaced Persons’ camp as soon as preliminary investigations were concluded.

In the course of sustaining the ongoing precursor operations, Nwachukwu said the troops have conducted long-range fighting patrols and ambushes, seeking out and clearing the terrorists’ hideouts in Saada and Juwei in the fringes of northern part of Borno State in the past two months.

“During the operations, troops intercepted and arrested 53 fleeing insurgents who have been profiled and are currently helping with investigations.

“Fifteen insurgents have also willingly abandoned the insurgent group, describing it as a futile struggle and have surrendered to troops of Operation Lafiya Dole within the period,” he stated.

However, an undisclosed number of soldiers paid the supreme price in the encounters and callous suicide bomb and Improvised Explosive Device (IED) attacks by the terrorists.

The Nigerian Army condoled with the families and relations of the deceased and vowed that troops would continue relentlessly in the ongoing offensive to decisively rid the North East hinterlands of the terrorists.

Members of the public were also urged to be more security conscious and vigilant in their homes, communities, places of worship, markets and other places of business to identify strange persons and any suspicious activity.

The Army also asked Nigerians to promptly report same to the security agencies while reminding them to “Say something, if you see something”

Related Topics:Boko Haram
Up Next