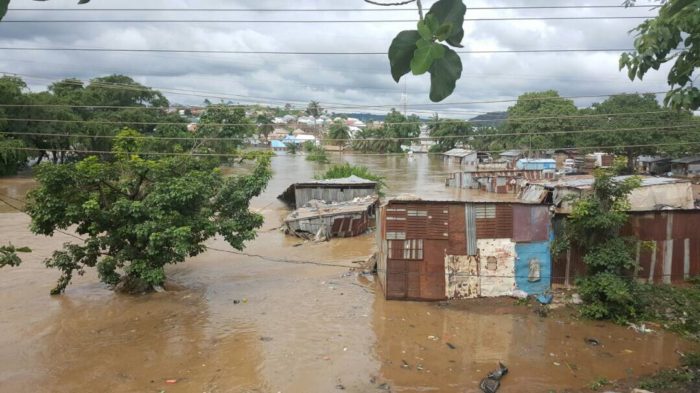 Mr Mustapha Maihaja, the Director-General, National Emergency Management Agency (NEMA) has presented relief materials to the Minister of FCT, Malam Muhammad Bello for onward distribution to over 100 victims of flood.

Maihaja, represented by Mr Fagbeni Kayode, the Director, Relief and Rehabilitation made the presentation at NEMA’s ware house at Gwagwa, a suburb of FCT in Abuja on Tuesday.

The News Agency of Nigeria (NAN) reports that the minister was represented at the occasion by Mr Adamu Abubakar, the Secretary, Area Council Services Secretariat.

The director-general said that the materials were immediate relief meant to ameliorate the sufferings of the displaced persons.

Maihaja said different communities in the FCT suffered flash floods and those that were badly affected involving casualties were DeiDei and Lokogoma communities.

“Flash floods were experienced in Bwari, Kwali, Kuje and AMAC Area Councils where over 100 households were affected, the relief materials will go round those assessed to have suffered the incidents,’’ he said.

According to him, the agency is determined to strengthen its coordinating capacity with stakeholders to ensure effective disaster management, as NEMA will not be able to carry out the task successfully without the cooperation of FCT.

“A strong and responsive agency that will coordinate all cases relating to disasters and emergencies in the FCT must be put in place.

“I wish to appeal to your Excellency to fast- track the process of establishing a well funded and equipped State Emergency in the FCT.’’

He commiserated with the government and people of FCT over the flood disaster and the attendant destruction of properties.

Responding, the minister Bello promised to equip and staffed the State Emergency Management Agency (SEMA)’ office as provided for in the 2018 budget.

He commended NEMA for coming to the rescue of the flood victims by providing relief materials.

“These relief materials presented to the victim will go a long way to bring relief to the people and help them kick start their lives,’’ he said.

According to him, NEMA has been helping victims of flood for a long time and they must be commended.

Bello assured that the relief materials would be distributed to the people that were affected by the flood.

“We pray that such disaster will never repeat itself again, we have gone round to educate the people on the danger of blocking drainage.

“So that before the next raining season, the drainage would have been cleared.” he said.

Alhaji Idris Musa, the Emir of Jiwa expressed appreciation to the Federal Government for providing the relief materials.

He also used the occasion to caution his subjects from throwing refuse in the gutter thereby blocking the drainage.

Related Topics:FLOOD VICTIMS
Up Next