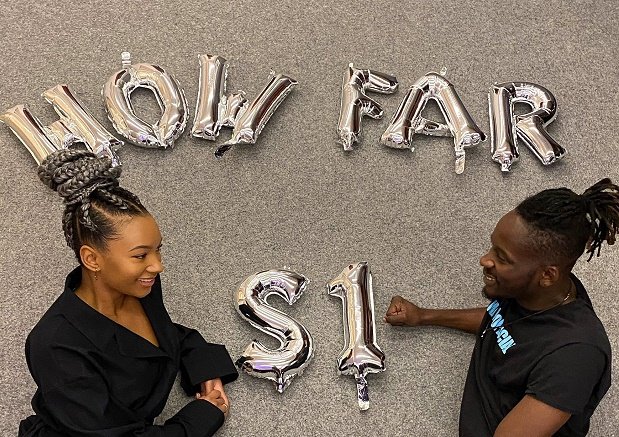 Femi Otedola, a Nigerian billionaire businessman, has asked Temi, his daughter, when she and Mr Eazi, a singer, who doubles as her long-time boyfriend, plans to get married.

On Tuesday, Temi had shared a photo of Mr. Eazi and herself dressed in black, smiling and staring at each other.

In the post, she had announced that they both intend to start a podcast, which is billed to launch in the same week.

“We started a podcast!!! Me and the Don @mreazi new podcast – HOW FAR – launches this week,” the caption to the post read.

“You’ll be able to listen to our weekly conversations via Apple Podcasts, Spotify, Youtube and anywhere you listen to podcasts. It’s about to be a madness….”

Taking to the comment section, Otedola asked his daughter when the lovebirds intend to walk down the aisle.

He also referred to her with the name ‘Moremi’, the role she played in ‘Citation‘, her recently released debut movie.

The actress and her singer boyfriend have been dating since 2017.

Otedola’s comment comes months after he had referred to Samuel Perry, a comic-actor better known as Broda Shaggi, as his son-in-law following a kissing video that DJ Cuppy, one of his daughters, made with the 27-year-old actor.

It also follows after the billionaire businessman broke the internet after he purchased Ferraris for his three daughters.

In 2005, Otedola made a N300 million personal donation to the completion of the National Ecumenical Centre—Nigeria’s primary place of Christian worship—in Abuja. In 2007 he was among a group of donors who gave N200 million to the State Security Trust Fund in a drive to reduce crime in Lagos State. Later that year he donated N100 million to the Otedola College of Primary Education in Noforija, Epe. In 2008 he donated N80 million to the Faculty of Agriculture at the University of Port Harcourt. Femi Otedola fulfilled his pledge of 25,000 dollars to the Super Eagles in the match against Algeria in the 2019 AFCON