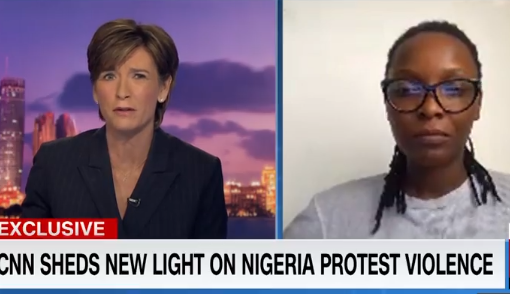 A Nigerian disc jockey, DJ Switch who filmed the shooting of protesters in Lekki, has challenged Babajide Sanwo-Olu, Lagos governor, to tell the “truth about the incident.”

She was speaking on Wednesday in a live interview with CNN — shortly after the American cable network unveiled the identity of a protester who reportedly died on the night of October 20 when the army opened fire on #EndSARS protesters.

There have been conflicting reports on the casualties after the shooting which continues to attract global attention.

Sanwo-Olu had blamed it on “forces beyond his direct control”. The army had also denied being responsible while the federal government said it would investigate the tragic incident.

But in the interview, Switch called on Sanwo-Olu to say the truth and put an end to the conflicting stories making the round.

“With no due respect, I actually challenge the governor of Lagos State to just say the truth. They know the truth. It’s been out there, their conflicting stories with each other. Nigerians died. This is no time to play games,” she said.

“Families are looking for their loved ones. To be honest with you in regards to me, I don’t know how to feel because, on one hand, I am grateful that I am alive today. But on the other hand, I don’t know if to say I am lucky.

“‘Cause, it’s almost like I’m saying others weren’t. The governor owes a responsibility to the citizen to say the truth.”

DJ Switch: Nigeria is a dictatorship with a democratic face

The DJ also claimed that the country runs a dictatorial system with a democratic face to sway the international community.

“At this point, I don’t hold what the president of the Federal Republic of Nigeria says to heart. Nigeria is a dictatorship with a democratic face. I think that is primarily to please the international community,” she added.

“It is our right to protest for the change that we demand. The Nigerian government has used force from the beginning, starting with trying to infiltrate a peaceful protest with thugs but that did not work.

“And then they moved to bring the military in. So, the same government that says that it has banned SARS—and this is going for close to four years now they keep banning SARS—is saying that it wants to have a dialogue.

“The president has not even come out once to address the shooting at the toll gate. So I do not take his words to heart. They must show accountability. We need action, change and most importantly, we need accountability.”