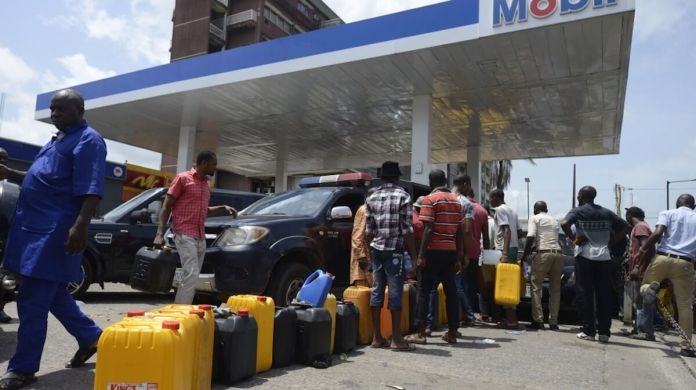 The biting fuel scarcity across the country assumed a frightening dimension yesterday with most petrol stations closing shops due to non-availability of the products, while queues stretched over several kilometres in the few stations dispensing petrol.

In a swift reaction, a worried opposition Peoples Democratic Party (PDP) challenged President Muhammadu Buhari to assume his responsibility as Minister of Petroleum Resources and find a quick solution to the lingering crisis.

However, the Group General Manager, Public Affairs, of the Nigeria National Petroleum Corporation, Ndu Ugbamadu, told THISDAY last night that the corporation was working round the clock to stabilise supply nationwide.

In Lagos, many fuel station remained shut for most of yesterday, while petrol sold for as high as N300 per litre in the black market. Fuel queues formed at the few stations dispensing fuel created traffic crunch that effectively crippled commercial activities in the city.

Hundreds of commuters in Lagos were stranded at different points across the state as a result of the worsening scarcity.

Checks also revealed that the rippling effect was felt by all, from the large number of stranded passengers at bus stops, to a sharp increase in transport fares across the state.

Although the fuel metres of virtually all the filling stations THISDAY visited in Lagos read N145, which is the official price, they all sold their products between N180 to N200 per litre.

Also not left out in the price hike were the black market dealers, who sold their products for as high as N250 per litre to some desperate Lagosians.

Further investigations showed that the few fuel stations which dispensed sought for extra gratification from the desperate buyers.

Most motorists that spoke to THISDAY called on the federal government to rise to the occasion and save the citizenry from the perpetual suffering in the hands of marketers.

In Anambra State, petrol sold for N250 and N300 per litre in some parts of the state yesterday.

Attempts by the Department of Petroleum Resources (DPR) to force marketers to sell the product at the government regulated price of N145 per litre failed, with some of the stations openly rejecting DPR’s plea and enforcement.

THISDAY checks round Awka reveals that even though the price of the product was high, it was also not available to motorists who were moving from one spot to another.

Edo State Government and the DPR have commenced monitoring of petrol stations, with a vow to prosecute marketers found to be hoarding the products.

In a statement signed by Secretary to the Edo State Government (SSG), Mr. Osarodion Ogie, the state explained that the exercise was to ensure that the products allocated to Edo State were dispensed to buyers at the official pump prices and save the people the hardship they suffer in the hands of shylock marketers.

In Kwara State, the DPR yesterday sealed six filling stations in Ilorin metropolis and Ajase- Ipo in Irepodun local government area of  Kwara state for hoarding petrol and for other offences.

The DPR’s Head of Operations in the state, Engineer Oyedele Ibitayo said the stations were found culpable for various infractions ranging from diversion of fuel, overpricing, under dispensing to hoarding of petroleum products.

Ibitayo, though, admitted that fuel supply to the state had been low in the past two weeks, stating that whatever comes in must be properly dispensed by the marketers.

Worried by the impact of fuel scarcity Kwara State, Governor Abdulfatah Ahmed, has approved the constitution of a task force on the control and sale of premium motor spirit (PMS) in the State.

Some filling stations found to be selling petrol above the pump price of N145 per litre in Ekiti State, were yesterday penalised by the DPR.

Before the DPR’s action and enforcement, some petrol stations were selling between N150 and N160 per litre, while also hoarding the product, which further compound the burden on the buyers.

In a related development, the PDP yesterday challenged President Muhammadu Buhari to assume his responsibility as Minister of Petroleum Resources and to find a quick solution to the lingering crisis.

Similarly the National Chairman of the Labour Party Mike Omotosho said that the federal government should be responsive enough to roll out measures that would quickly arrest the fuel crisis.

Omotosho who spoke in Abuja yesterday said that he had applauded the government over the stability in the fuel supply chain only to be jolted by the reemergence of long queues at our petrol stations.

The PDP, in a statement signed by its National Publicity Secretary, Kola Ologbondiyan, insisted that it was not enough for the President to sit in his comfort zone and put the blame of the fuel scarcity at the doorsteps of marketers, while Nigerians continue to suffer untold hardship.

“The unbearable fuel situation in the country is completely unacceptable. Mr. President must become up and doing. When he took office as President of Nigeria and also as the Minister of Petroleum Resources, he was aware that the buck stops at his table. Nigerians must not be made to suffer especially at this time of the year when we have the yuletide and New Year festivities, which come with a lot of activities.

“This is the same APC government that promised that it would make fuel available and affordable. Today, under their deceitful and corrupt watch, fuel has not only become extremely scarce, the price has also risen from where the PDP left it at N86.50k per litre to as high as N300 per litre and above.

“The effect is that transport fares, running costs, prices of food, medicines and other basic needs have soared beyond the reach of Nigerians, who are now groaning heavily under the hardship of APC misrule.

“But should Nigerians be subjected to this type of anguish and pain after supporting APC to win election in 2015? Does APC indeed deserve another support in 2019?”

“Whereas we know that the time is already up for the APC, we nevertheless urge Mr. President to, within the remaining short time, rise up to his responsibilities as the minister of petroleum or immediately relinquish that position and allow a competent person to run the ministry. Enough is enough”, the party said.

The statement urged Nigerians not to despair but rekindle their hope in the future as the PDP is now repositioned to regain power in 2019 and return the nation to the path of good governance, social stability and economic growth, for which it is generally known.

In Ekiti State Governor Ayodele Fayose condemned the federal government over alleged nonchalant attitude towards ending the fuel scarcity and called for the immediate resignation of Buhari as Minister of Petroleum.

The governor, who reiterated his position that the APC-led federal government was punishing Nigerians with fuel scarcity so as to achieve its “planned increment of petrol pump price from N145 to not less than N185 per litre,” added: “Already, fuel is being sold officially at between N180 and N200 at petrol stations across the country.”

Fayose continued: “It is sad that this Buhari’s APC government had to choose this Christmas and New Year period to ground Nigeria with the fuel scarcity that it deliberately orchestrated.”

“It is obvious that the President has failed in all ramifications and he needs to do Nigerians a favour by relinquishing his portfolio of Minister of Petroleum.

“Like I said a few days ago, what the federal government is doing is to create scarcity, so that Nigerians will be willing to buy at any price, provided the product is made available.

“It was to achieve this planned increment of petrol pump price that they restricted supply of petrol to NNPC alone.

Nigerians now that the only option to rescue our country from being brought down completely is to vote out Buhari and his APC in 2019.”

Ugbamadu attributed the biting scarcity to diversion by some marketers and assured that supply would be stabilised in few days’ time.

He also said the Corporation’s GMD has directed that allocations be increased to Lagos and Abuja, even though Lagos at present gets 300 trucks daily. And that a ship discharges products everyday all in an efforts to resolve the linjgering scarcity. This is further augumented by local production, the Port Harcourt Refinery produces 3 million litres everyday.

To tackle the current crisis, he further stated that all NNPC statioins has been directed to open an dispense products to the public on a 24-hour basis.

Related Topics:FUEL CRISIS
Up Next